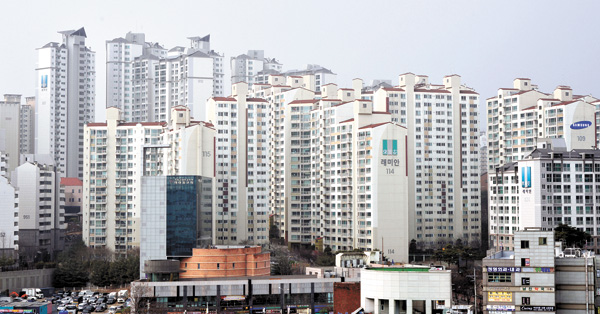 Housing transactions, which had been slow for some time, seem to have regained their vitality.

The inventory of unsold apartments is at its lowest level in 11 years and a record number of units are expected to be sold this year.

The stock market welcomes the improvements taking place in the property market, as an uptick in real estate prices is widely expected to have a positive effect on the equity market since the two markets are tightly connected.

“What’s important is that the trend of real estate prices precedes that of stock prices in Korea,” says Kang Hyun-cheol, an analyst at NH Investment & Securities. The movement in housing prices occurs one to three months ahead of the Kospi, according to Kang. “With rare exceptions like China, where assets concentrated in the real estate market flow into the stock market, the rise in housing prices means bigger financial means for stocks,” he says. 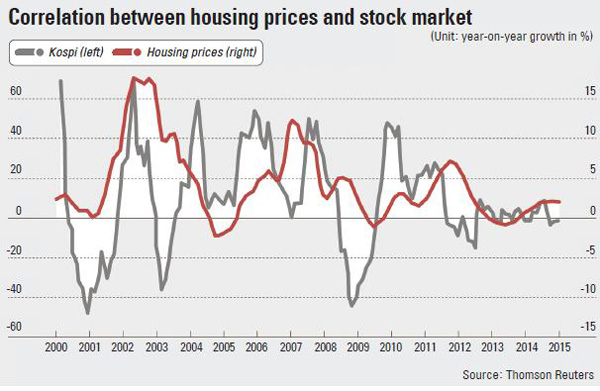 Recently, various indices in the real estate market have turned in robust performances. According to Meritz Securities, this year’s supply is estimated to be 346,717 houses, compared to the record of 325,000 in 2002.

The number of unsold apartments fell 8.4 percent month-on-month in January, the lowest level in 11 years, and transactions are on the rise. In Seoul, 8,144 apartments were sold last month, according to the Seoul Metropolitan Government’s real estate information center. This is the most in February since sales started to be tracked in 2006.

“Improvements in the pre-construction subscription system shrank waiting lists and allowed 2.2 million applicants to be promoted to the priority group” says Yang Ji-hye, an analyst at Samsung Securities. “When including applicants from other regions and newcomers, more than 10 million people are in the priority group for apartment pre-construction subscriptions.”

“The national real estate market has rebounded from the inflection point in the second half of 2013 and shown ascending numbers since last year,” adds Kang Seung-min, another analyst from NH Investment & Securities. 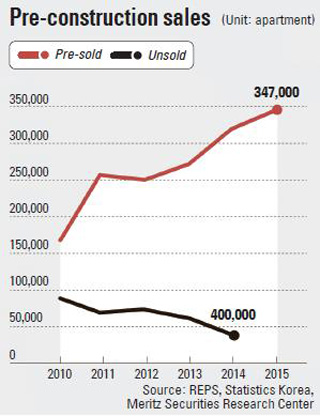 “This year’s real estate market entered the virtuous circle,” says Kim Hyung-keun, an analyst at Meritz Securities. He predicts new apartment sales outside the capital area will stimulate reconstruction of property in the Gangnam District of Seoul, one of the most affluent areas in the country, and that will again lead to more transactions for new apartments in the capital. More sales will boost reconstruction in other areas and lead to redevelopment of Gangbuk District, northern Seoul, according to Kim.

His forecast is based on new government regulations that helped to revitalize reconstruction in Gangnam District, rising demand for new housing because of high prices for jeonse (lump-sum deposit) apartments and low interest rates.

Analysts also expect to see a “wealth effect,” which refers to the phenomenon where increases in the value of assets such as stocks and real estate boost consumption.