[Cooking with Her Excellency, Germany] After time in Germany, chef sees similar tastes

[Cooking with Her Excellency, Germany] After time in Germany, chef sees similar tastes 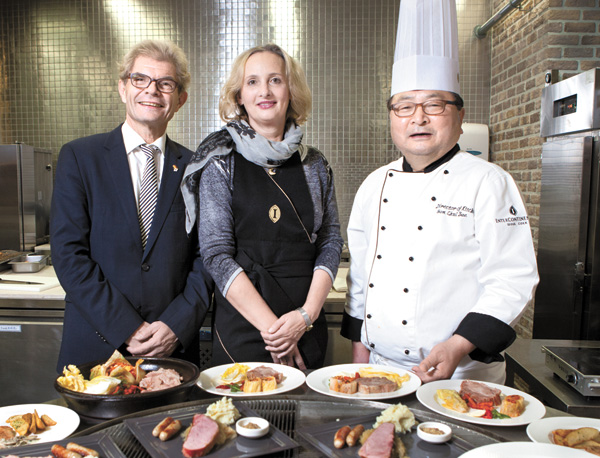 Q. Why did you choose this dish?

A. Holding with the theme of pork, I thought of a dish that can be enjoyed for the taste of the fresh meat itself without being dependent on spices or seasoning.

You have a long history with cooking German food. What do you think of this German dish?

I trained under a German senior chef for nine years in 1999, and later an Austrian chef. I also have experience working at a sausage factory for 40 days in the German town of Aschaffenburg. 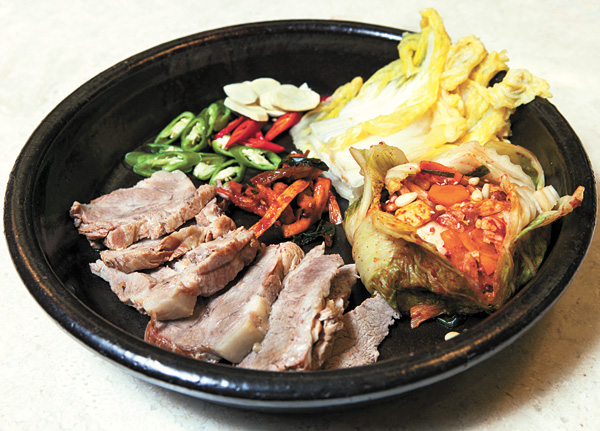 Germany is a country where different regions each feature distinct characteristics from old times, and this is reflected in their cuisine. How each region cooks and enjoys food is also different, thus the representative food of Germany, sausages and beer, tastes different depending on the region. The eastern region uses strong spices, while the northern region bordering the sea has Scandinavian influences and eats fish such as herring. The western region, at the basin of the Rhine River, is characterized by milder seasoning, while the south has more dishes with sausages and potatoes, as well as beer, than other regions.

How do you think bossam is similar to the German dishes prepared today?

I think that preparing pork in a large portion is very similar to the kassler [smoked pork], more than any other dish. Jagerschnitzel is like donkatsu [Korean- and Japanese-style pork cutlet]. Sauerkraut can be like kimchi. Korean may evoke when thinking of German cuisine.

What other Korean food items do you think would go with the German pork dishes?

1. Clean the pork neck, parboil in water and drain.

2. Place pork in a medium-to-large pot and add soy sauce, cooking wine, garlic, scallion, onion, doenjang and water until the pork is completely submerged. Boil for about an hour. As the liquid condenses down to expose the meat, add more water until pork is covered again.

3. Take out pork when tender and slice into desired width.

1. Dissolve salt in water in a one-to-five ratio. Soak cabbage for five minutes

2. Mix cut cabbage with remaining ingredients in a bowl.