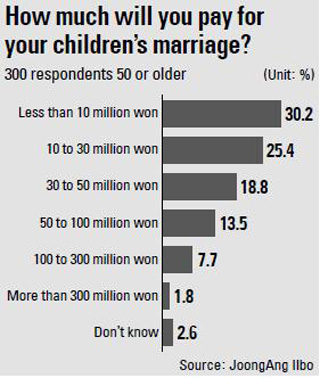 Park Hyeon-suk recalls falling into a depression after her son walked down the aisle in 2009. She mourned having lost her greatest joy in life and often wished she could return to a time when her boy was single.

But Park’s son, now 36 years old, wasn’t all that had previously lifted her spirits, the 65-year-old said. Her friends and casual singing and swimming lessons also brought her joy.

However, all of that vanished when her son moved into a new house - and she moved out of hers.

To help her son purchase an apartment in Seongdong District, northern Seoul, where he would live with his new bride, Park sold her house in Cheongju, North Chungcheong, about 133 kilometers (83 miles) southeast of Seoul.

The apartment her son wished to buy called for more than 300 million won ($273,000), which he didn’t have - but neither did Park or her husband, who were living in an apartment worth 120 million won.

But instead of convincing her son to look for a cheaper house, Park sold her apartment and managed to collect 80 million won more from her savings, acquiring 200 million in total.

Homeless, she and her husband moved to the suburbs and bought a smaller house worth 30 million won, spending an additional 15 million won to redesign it.

“I want to move back to Cheongju, even if it means living in a smaller home,” Park said before lamenting that she cannot, with nothing suiting her financial status. “After giving our son all our savings, we’re in quite a quandary now.”

In a recent survey that asked 1,000 newlyweds in Korea how much they spent on their marriage - including wedding costs, new homes and furniture - respondents on average said 240 million won, according to Duo, the country’s top matchmaking agency.

Around 65 percent of that comes from the groom’s family, while the rest is usually paid by the bride’s side.

Data compiled by the Korea Consumer Agency indicates that costs have risen 2.5-fold from 2003 to 2013, and pundits here claim that most, if not all, are sponsored by the couple’s parents.

“In the old days, there was this tacit gentleman’s agreement that parents pay for their children’s marriages, and those kids later take care of their parents when they become fragile,” said Kim Dong-yeob, the director of a retirement research center under Mirae Asset.

“But now that people are living longer and economic growth is staggering, it has made that scenario increasingly impossible,” Kim said, adding that parents must now “meticulously calculate” the living expenses they’ll have after retirement and minimize funding their children’s marriages.

In a recent JoongAng Ilbo survey polling 300 parents 50 or older, 75.3 percent said they have or will financially support their children’s marriage costs, 65.3 percent of which added that it was a “parent’s obligation” to provide such funds.

When questioned over whether they would stick with that plan even if it meant they would have to take out loans, three out of 10 said they would.

“Parents have to genuinely inform their children of their financial status and cut back on spending,” said Jeon Gi-bo, the head of the Chartered Retirement Partner Company, adding that they should also communicate with their in-laws so both sides would refrain from making “unreasonable demands.”

Kim Mi-ok, 60, who requested that her real name not be used, admitted that she and her husband lost a huge chunk of their income after her daughter recently wed.

Living on a teacher’s pension worth 3 million won, the couple sold their officetel - a single-room studio equipped with a kitchen and bathroom - for 100 million won. From that sale, they lost the 7 million won in annual income from their tenant’s monthly rent payments.

Her daughter’s marriage drained 150 million won, 60 million won of which was from the wedding ceremony, which was held in a luxurious hotel. Kim says the venue was chosen by her in-laws, who coerced her to pay up “in return” for their purchase of the newlyweds’ house.

The jeonse contract - a two-year rental based on lump-sum deposit - for the house called for 300 million won.

“Next time, when my son ties the knot, I might have to move into a smaller house,” Kim said.

As for Park Hyeon-suk, the 65-year-old who sold her house in Cheongju for a smaller unit in the suburbs, she recently purchased a secondhand compact car so that she could drive downtown every day.

But despite the 200,000 won she spends on gasoline per month, Park said it was better than staying home.