‘Chalk Circle’ given an operatic spin

‘Chalk Circle’ given an operatic spin 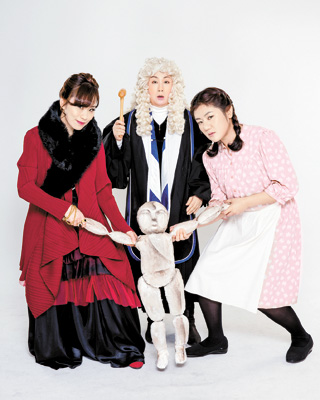 The National Theater of Korea is again attempting to break the stereotype that changgeuk, or traditional Korean opera, is boring and difficult, with “The Caucasian Chalk Circle.”

The groundbreaking piece based on the renowned play of the same title is a stunning collaboration with Korean-Japanese writer and director Chong Wishing, who gained attention for his previous work “Yakiniku Dragon.”

According to Kim Sung-nyo, the artistic director of the company, the history of Korean classical opera is not very long despite what the public thinks.

It has been about 100 years since it was derived from pansori, or Korean narrative singing, at the end of the Joseon Dynasty (1392-1910), and it was first staged at the National Theater just 50 years ago.

“People might think the collaboration with the Western play ‘The Caucasian Chalk Circle’ could have a negative impact on changgeuk, but this genre has been rapidly transformed with the dynamic change of Korean history,” said Kim at a press conference held last week in the Heorum Theater at the National Theater of Korea in Jung District, central Seoul.

The play, written by exiled German writer Bertolt Brecht in the early 1940s, is being reinterpreted as a version of Korean classical opera for the first time.

“The story of Grusche [the title role] is maternal love, which Korean viewers are familiar with,” said Kim.

“The simple, heart-wrenching story will touch the audiences’ hearts and it is easy for Koreans to approach with the unique style of Korean classical opera.”

“I have dreamed about writing traditional Korean songs that people can sing along or hum to,” said Professor Kim.

“Western music is catchy, so audiences easily hum the melodies, but it never happens for traditional Korean songs. However, I dare say that the audience will sing along to the songs from the changgeuk.”

According to the company’s artistic director, “Chong said pansori has the power to captivate one’s soul, and that was the reason he decided to join the project.

“I believe power pervades this experimental classical Korean opera and that it will be a role model in the future.”

*“The Caucasian Chalk Circle” runs from March 21 to 28 at 8 p.m. on weekdays and 3 p.m. on weekends at Haeorum Theater at the National Theater.