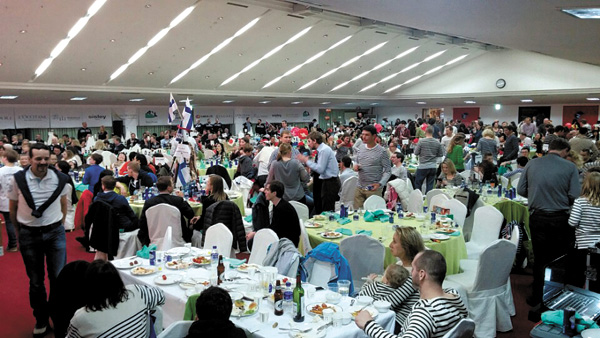 International participants at the 33rd Yongpyong International Ski Festival gather on Saturday for a banquet on the second of the three-day festival in Pyeongchang County, Gangwon. By Lee Sung-eun

In the host city for the upcoming 2018 Winter Olympics, expats enjoyed three days of skiing and festivities at the 33rd Yongpyong International Ski Festival, where they received special discounts of up to 70 percent off on accommodations and lift passes.

At the event’s highlight - the ski and snowboarding competition held on the second day - Germany took home the most medals with 10, followed by Norway with eight, France with six and Switzerland with five.

Around 260 contenders, some as young as 3 years old, participated in the race, which was divided into seven age groups and segregated by gender.

“This isn’t an event only about skiing,” said Belgian Ambassador Francois Bontemps, who served as chairman of the festival’s preparation committee for the second consecutive year. “It’s also about enjoying life, and to enjoy the community of being together.”

“Belgium is a country with no mountains and 20 percent of the country is below sea level,” he explained with a laugh, adding that the festival was a great opportunity to gather together Korea’s expat community.

Austrian Ambassador Elisabeth Bertagnoli, who attended the international ski festival for the second time this year, agreed with Bontemps.

The most admirable aspect, she said, was the cosmopolitan vibe and how foreign residents could enjoy sports and meet new people living in similar circumstances.

That feeling reached its peak after the competitions on the second day, when the event’s expats, who were mostly accompanied by friends, families and coworkers, filed into the banquet hall for dinner, which included a buffet, a magic show, an awards ceremony, a raffle and a dance party.

But what had the crowd on their feet, chanting and roaring, weren’t the pigeons from the magic show, the luxurious hotel packages handed out during the raffle or the play list at the dance party.

One by one, as the emcee called out the names of the medalists, their fellow countrymen howled cheers in unison, hands clapping or flung high into the air, as the men lifted the recipients onto their shoulders and carried them on stage.

With their medals dangling around their necks and waving their national flags atop the three-tier award podiums, the international winners created a scene that seemed to be not so far from now, reminding the crowd once again the high hopes Korea has for the Winter Olympics.

“It’s fun [coincidentally] meeting a lot of my friends from school and getting a chance to be awarded on stage,” said Eric Sun, an 11-year-old Taiwanese boy who won the silver medal in the men’s junior division.

His friend, 11-year-old Clare Sohn, who attends Seoul Foreign School, won the gold in the women’s junior division. “America goes crazy about these things,” she said, “so it’s pretty cool to be a part of it.”