Katy and Kim prove black is new black at Givenchy

Katy and Kim prove black is new black at Givenchy 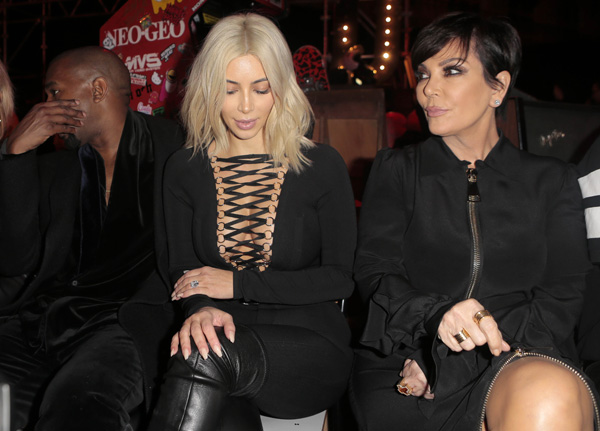 PARIS - Katy Perry and Kim Kardashian were the queens of the night at Givenchy’s star-studded dusk show in Paris, rocking all-black Givenchy outfits side-by-side as Kanye West, also in black, lurked in the back.

“Black is always elegant. It is the most complete color in the world,’’ said Givenchy’s designer Riccardo Tisci.

With that in mind, the Italian-born designer scored a coup - dressing two of the world’s most famous women in his own monochrome looks at the fall-winter womenswear show Sunday - the big ticket of the evening.

The newly-blond Kardashian wore a figure-hugging jumpsuit, with black lacing over a very revealing cleavage, hugging and smiling Perry who stayed demure in a loose black lace shawl.

Other shows were all about creature comforts, with Kenzo treating bleary-eyed guests to coffee and cookies and singer Lorde, who’s sold over 17 million records at the tender age of 18, took a moment to relax, shying away from interviews in the new spring sun inside the Grand Palais.

This season’s mantra is: pile it all on.

It takes a lot to drag fashionistas out early on a Sunday morning to a venue on the outskirts of the city.

But Kenzo rewarded those who did - feeding them tasty delights - and treating them to an incredibly energetic presentation, in which gargantuan rectangular mirrored walls moved behind models in the warehouse venue.

The collection too continued this energy in its vivid splashes of kinetic graphic lines and flashes of contrasting, colored prints.

But fall-winter was all about the layering. Geometric lines featured on layered A-line column dresses, topped off with funky asymmetrical poncho-hoods. AP