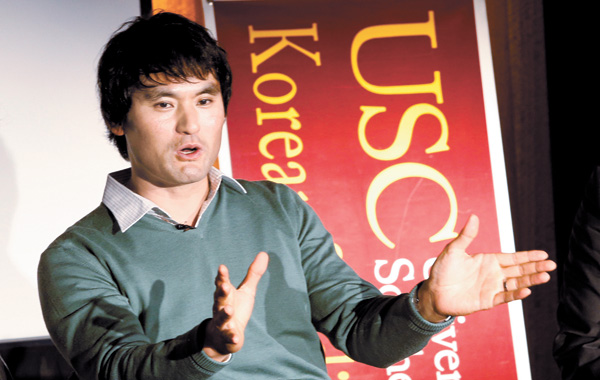 Park Chan-ho speaks during a lecture at the University of Southern California Korean Studies Institute on Feb.24 in Los Angeles. [L.A. JoongAng Ilbo]

Words like “first” and “best” are frequently used to introduce Park Chan-ho.

The 41-year-old right-handed pitcher is the first Korean to play in Major League Baseball and holds the record for most wins (124 against 98 losses) and innings pitched (1,993) by an Asian.

But Park, who retired last year, has his own definition of success. In a lecture at the University of Southern California Korean Studies Institute last month, Park told students to focus on growth, not success.

Q. Why did you pick Tiger Woods as the person you are most interested in these days?

A. We saw how great Woods once was, and we still know that. But not many people say Woods is doing well after seeing him play these days. In the past, Woods’ game was unbelievably great and something that was envied by others. Many people would have felt that way after seeing Woods play his way to the top. However, who is better, a person who makes you envious or a person who can move your heart? If Woods can overcome this difficult time and claim a trophy again, that could move people’s hearts.

You also touched Koreans’ hearts during the 1998 Asian crisis.

I didn’t intend to move their hearts. Being Korea’s first major leaguer is my personal success. I didn’t touch people’s hearts, but they found some relief and hope in my games.

Why did you select the L.A. Dodgers when you had an offer from the New York Yankees?

That’s just because of the Dodgers’ shiny blue jacket [laughs]. When I was about 18, there were friendly games in Los Angeles among U.S., Japanese and Korean high school teams. My heart fluttered, as it was the first time for me to take an airplane and watch American baseball. Anyway, we won games and I went to Dodger Stadium, but the scene there was like a movie itself. Everything in the stadium put me in awe. I had about $200 for buying souvenirs for my friends, but I spent that money buying the jacket instead. A gift shop clerk told me players wore the same jacket.

Did you have hard time because you are Korean?

I was thinking that I’m carrying Korea on my back. It was unfamiliar and inconvenient to face new things, but I just thought that my teammates hated me, when it was they who were having a hard time. But as I got familiar with the culture and comfortable with the fact that I was different from them, I didn’t care about race or other things. I think we should not think about living as Koreans, Americans or Korean-Americans, but to live as humans. If we frame ourselves, it’s difficult.

What do you think about your 124 wins in Major League Baseball?

On the night I collected the 124th win, I cried in my hotel room. Not because I was happy, but because it was in vain, so I sobbed for an hour. I had gritted my teeth and was determined to break Hideo Nomo’s record [123 wins] even though I had been demoted to the minor leagues. However, it turned out to be nothing. When I got the 124th win, I thought about all the young players who will eventually win 125 games, and there will be better players in the future. I think it’s useless to say that having better stats than someone else is a success.

Then what is your definition of success?

Growth. For every second and moment, you set a new target and challenge and that’s a success. I’m not the only one who thinks that I want to go further ahead than other people. They all put in their best effort, but there are some who are above my head. It doesn’t always go well when you try to apply other people’s standards to yourself. But by focusing on your true identity, you know what to do as well. Then you will have the freedom to imagine your plan and get closer to your dream.

Do dreams start with imagination?

When I bought that Dodgers jacket and wore it every day, I always thought that someday I would go to the major leagues. Just 19 months later, the players I imagined playing with were right behind my back. Imagination created a dream, and with the dream I found detailed goals. And there were people I didn’t like very much, but I also learned lot of things through that time. Going through a difficult time is painful, but when you overcome, you will have know-how. Don’t imagine that you are superior, just enjoy every moment of growing.