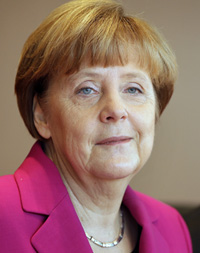 The German chancellor and a retired American lawmaker are the latest to call on Tokyo to formally apologize to the now elderly women who were forced into Japanese military brothels during World War II.

German Chancellor Angela Merkel on Tuesday urged Japan to resolve the “comfort women” issue in talks with Katsuya Okada, the head of the main opposition Democratic Party of Japan.

On the second day of her visit to the island nation, Merkel advised Okada that Tokyo should seek reconciliation with Korea over its record of wartime sexual slavery, according to Japanese media.

Merkel also told Okada that “Japan and South Korea share values … [and that] it’s better to resolve the ... issue properly.” 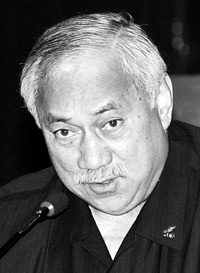 Over the course of her trip, Merkel was vocal in pointing out that Japan’s reflection on its wartime actions was necessary in order for it to mend relations with its Asian neighbors, using Germany’s experiences after World War II as an example.

On Monday, she said in a joint press conference with Prime Minister Shinzo Abe following a summit with the Japanese leader that settling the country’s wartime past was “a prerequisite for reconciliation.”

She added in a speech at the Asahi Shimbun headquarters in Tokyo later that day that the international community’s acceptance of Germany after the horrors of World War II and the Holocaust was only enabled by the nation facing its “history openly and squarely.”

“Merkel choosing to speak at the Asahi Shimbun, which is facing pressure by the Japanese government, is already one tacit signal,” the liberal German daily Suddeutsche Zeitung wrote.

The newspaper also praised Merkel for honestly addressing Tokyo’s historical and territorial disputes with its neighbors “in an expert manner” and refraining from criticizing the Japanese government outright.

The Asahi Shimbun, under pressure from the Japanese government last August, retracted a series of reports from the 1980s and 1990s based on the testimony of Japanese soldier Seiji Yoshida, who claimed that he kidnapped young Korean women to serve in military brothels.

Abe in October claimed the newspaper “wounded Japan’s image” through its “mistaken reporting,” thereby effectively ignoring that the international community, major organizations including the United Nations and the victims themselves stand by accounts that Japan’s military coerced girls and women into sexual slavery during World War II.

Conservative Japanese media outlets such as the NHK glossed over the significance of Merkel’s remarks for the Asahi in its coverage of her visit.

Voices in Washington, namely former Congressman Eni Faleomavaega, also urged the Abe administration to quickly resolve the issue, particularly in the lead-up to the 70th anniversary of the end of World War II on Aug. 15.

Faleomavaega, who was a member of the U.S. House of Representatives for 25 years before retiring this year, wrote in an article for The Hill on Tuesday that Abe is scheduled to visit Washington in the spring and is eager to address both the House and the Senate.

He pointed out that the House chamber, in which the address would be presented, is where representatives passed a landmark resolution in 2007 that demanded that Japan apologize for its military’s sexual transgressions during the war.

“If Abe is invited to speak in a chamber of historic significance, it would be only fitting and proper for him to bring final closure to certain historic issues regarding the Second World War,” he added.

“The time is now, Mr. Abe,” he continued. “Our grandmothers are waiting to hear your apology echo in the very chamber where Resolution 121 was passed,” Faleomavaega said, referring to the aged former comfort women.

Additionally, Dennis Halpin of John’s Hopkins University’s U.S.-Korea Institute, an expert on Asia, published an article in the National Interest on Monday titled “U.S. Should Be Appalled by Japan’s Historical Revisionism,” in which he criticized the Abe administration’s recent attempts to edit excerpts in U.S. history textbooks regarding comfort women.

“The Japanese Foreign Ministry said that, ‘It is inappropriate to simply compare Japan with Germany,’ providing an escapist response,” he added.

“Germany’s voiced repentance for its past and introspection has rung across Northeast Asia,” he said. “And historians also are directing Japan that to recognize its history is the only way toward progress.”