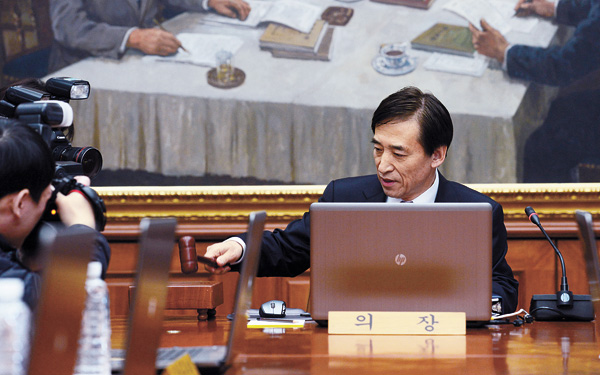 The Bank of Korea joined other central banks around the world Thursday when it shaved 0.25 percentage point off the key interest rate to bring it to a historic low of 1.75 percent.

The move was unexpected and a clear sign the Korean central bank thinks the lackluster economy needs help amid growing concerns over the nation’s export competitiveness due to the depreciation of other currencies where interest rates are low, including China, Australia and Singapore.

Some market experts think this isn’t the bottom and another rate cut could follow despite Bank of Korea Gov. Lee Ju-yeol’s warning about such expectations.

Lee said Thursday that the majority of the members of its monetary policy committee evaluated that economic growth and inflation pressure were below its assessment made in January.

“The monetary policy committee believed that lowering the interest rate an additional 0.25 percentage points was appropriate,” Lee said during a press conference held after the monthly meeting. “In the second half of last year, we lowered it a [combined] 0.5 percentage points but decided another interest rate cut was needed in order to revive the economic recovery momentum.”

Although some market analysts predicted the central bank would most likely ease monetary policy in the first half of this year, most were expecting it in April when the BOK announces its revised outlook on economic growth. In fact, a survey by the Korea Financial Investment Association that was released earlier this week showed that among 114 bond experts, 92 percent, or 105, projected that the central bank would again freeze the key interest rate Thursday.

“The BOK surprised markets this morning by cutting its policy rate by 25 basis points,” said Mark Walton, BNP Paribas senior economist, through a statement released Thursday. “Most recent comments from the BOK ahead of today’s meeting suggested that the perennial problem of rising household debt, exacerbated by cuts in the interest rate last year, would stay the BOK’s hand.”

Most of the market’s response to the nation’s first 1-percent interest rate was positive as the Seoul primary market Kospi earlier in the day was pushed up near the 1,990 mark.

Expectations that the lowering of the interest rate would contribute to improving the profitability of Korean exporters while boosting the domestic market including the property market helped spread the positive sentiment.

“The interest rate cut shows the strong will of the government to boost the economy,” said Kang Hyun-chul, a researcher at NH Securities.

Later in the day, however, the Kospi tumbled, losing 10.24 points or 0.52 percent compared to Wednesday, to close at 1,970.59 as foreign and institutional investors offloaded shares.

Although share prices as the market closed dipped, banks shares were able to close at a higher value than on the previous day.

KB Financial Group saw its shares rise the most among leading banking groups as it closed 4.09 percent higher than on Wednesday at 38,150 won ($33.9). Woori shares rose 3.39 percent to 9,450 won, Shinhan Financial Group and Hana Financial Group each saw their share prices up more than 2 percent.

Market experts speculated that although the interest rate cut will affect banks that are already struggling with profitability, the expectation that an improving economy will contribute to the banking industry’s profitability was reflected in Thursday’s trading.

How bad is the economy?

Various indices released recently indicated the Korean economy wasn’t gaining momentum as much as expected since the government’s deregulation measures.

The housing market recently has shown signs of recovery, but industrial output in January fell 1.7 percent compared to December. During the same period, manufacturing and mining production saw their steepest drop in six years of 3.7 percent.

Although the current account balance showed in surplus in January for the 35th consecutive month, that was largely because imports fell faster than exports due to low oil prices.

Inflationary pressure continued to weaken. In February, consumer prices grew half a percent, below 1 percent for the third consecutive month. When excluding the price of cigarettes, which doubled this year, consumer prices actually declined.

The central bank in its statement released Thursday noted the domestic economy was stagnant in the areas of consumption and investment, while the sentiment of economic participants including companies showed no signs of improving.

Finance Minister Choi Kyung-hwan, who had remained silent on the issue since the beginning of the year, raised concerns over the nation entering a state of deflation.

At a forum last week, the finance minister said he wasn’t sure whether he should be laughing or crying over low inflationary pressure. He said that when considering the livelihoods of the average Korean households, falling consumer prices should be considered good news. But he added he was concerned the country might be stuck in deflation if the current levels of economic growth and inflation are prolonged any further.

The central bank governor, however, said he didn’t think the economy was at a critical juncture, despite own decision to bring interest rates to a record low.

When asked about his positon on deflation, he kept to his earlier stance and firmly denied that Korea was anywhere close.

“When a person speaks about deflation, it is a situation where the prices of all products are low,” Lee said. “But the current low inflation is largely caused by the supply impact [from low crude prices]. Although in February, consumer prices remained at the zero-percent range, core inflation was at 2.2 percent.”

He also stressed that for an economy to be in deflation, it has to be in recession, which Korea isn’t.

“It’s difficult to say that when we’re posting 3-percent growth we are in an extreme economic stagnation,” the governor said.

When asked if he brought the key interest rate to a record low because the economic situation was much worse than seven years ago after the global financial meltdown, the governor said it was wrong to compare the current situation to that period.

“By nature, the two periods are completely different since [in 2008] the shock was sudden, whereas the action we are taking today is targeted at growth and inflation in the long term,” Lee said. “To interpret [the lowering of the monetary policy rate] as a situation that is much worse is too much of a stretch.”

Lee stressed during the press conference that the action taken Thursday was a preemptive move to keep the economy from entering a perpetual state of stagnation.

He said the reason the central bank lowered its interest rate was because economic indices have turned out to be below its earlier estimates.

“In reviewing the data from the past two months, it was evident the recovery of the domestic market would turn out to be shorter than what we saw in January,” Lee said. “Of course more detailed data will be announced next month [when the BOK revised outlook is released], but we believed that the downside risk was expanding and therefore required a preemptive move.”

He stressed that the lowering of the key rate was not because the economic situation was critical, but largely to prevent a decline in growth potential.

“If we were to take action, we came to the conclusion that it would be best if we acted as soon as possible,” the governor said.

But even within the monetary policy committee, not everyone shared that view.

Among the seven members of the rate-deciding committee, Lee said two were opposed and raised their hands in favor of freezing the key interest rate for another month.

Hopes to boost the economy

The governor said the lowering of the interest rate last year will have an impact starting in April, since the influence of monetary policy moves in the real economy, including on consumer spending, appear six months later.

“The influence on consumption and investment will likely start showing up beginning in the second quarter.”

But some analysts believe otherwise.

“Lowering the interest rate is positive, but considering how economic sentiment is frozen, the effect it will have will likely be limited,” said Shin Min-young, an economist at LG Economic Research Institute.

“The weak won could lead to an exodus of foreign investors, as expectations are growing that the BOK could again lower the interest rate in the second quarter of this year,” said Kim Doo-un, an analyst at Hana Daetoo Securities. “Due to rising mortgages and low household incomes, even if people do not put their cash in savings, they don’t have money to invest in the stock market. The impact of rate cuts on the stock market would be limited.”

Some analysts already are betting the central bank will make another cut in the near future.

“Gov. Lee remained cagey about the likelihood of further easing, with household debt understandably remaining an ongoing concern,” said Walton of BNP Paribas. “Nonetheless, with concerns about weak growth and inflation set to remain at the forefront of BOK thinking, at least one more cut is likely.”

Moon Hong-cheol, an analyst at Dongbu Securities, is speculating the second rate cut for this year could come as soon as May.

“Because the key interest rate was lowered this month, the central bank still has room for another rate cut before the U.S. Federal Reserve starts raising its interest rate,” Moon said.