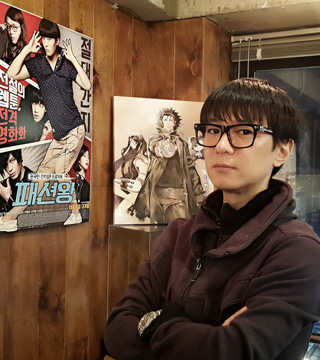 Just like the creators of dramas, movies and books, the writers of comics or graphic novels belong to production companies or publishing houses that direct the overall creative process.

Ylab, which produces webtoons - the Korean term for Internet cartoons - alongside many local writers, was founded in 2010 by Yoon In-wan, who garnered attention for his serial comic “New Royal Secret Commissioner” over seven years.

Yoon’s company adapts movies or dramas from comics, such as “Fashion King,” which was released in its film format last year. Another comic from the business, “Prince’s Prince,” will be available on the main website of KBS, one of the three major terrestrial channels in Korea, later this month.

“Anyone can become a webtoon writer, but not everyone sees success,” said Yoon in a recent interview with the JoongAng Ilbo, an affiliate of the Korea JoongAng Daily.

“We need a system that can find writers with potential.”

Q. What was it like to work in Japan?

A. The editors in charge of [my work] also acted as producers. If these producers think a writer’s intention from the beginning has not been clearly expressed in episodes, they turn down your work until you get it right. I was hurt and angry at first, but that made my work get much better.

How does Ylab train its writers?

Basically, we first plan out a project, propose them to portal platforms like Naver or Daum, and then look everywhere to find the right writer for the project. Sometimes we found them by looking through a booklet published by the Korea Creative Content Agency. Of course, the newbies go through training. We mentor them to try out different plots and ways to direct. We also help them complete at least three scripts, or up to 10, before the series is published.

Although the project’s main theme is set in advance, it’s up to the writers how to execute the story. Our purpose is to diversify the world of cartoons and comics so that we can contribute to making better pieces.


“Fashion King” wasn’t considered a hit. Do you still want to pursue adapting comics into movies?

C.B. Cebulski, Senior Vice President of Marvel Comics, said that it took around 70 years for the company to make movies like the “Avengers” series, while Ylab has only been around for four years.

His words were really encouraging. Ylab made 4 billion won ($3.6 million) last year. This proves that we can be a comic production company. “New Royal Secret Commissioner” is the best-selling Korean comic in Japan. Fifteen books in total are out, and each sold more than 400,000 copies.

We aim to publish a series that sells better than this one worldwide, too.