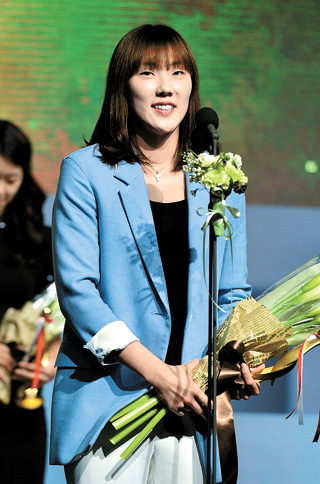 Park, 24, played in all 35 games this season and averaged 10.5 points, 3.1 assists and 5.5 rebounds per game to lead her club, Woori Bank, to its third straight regular season title. She was the league leader in playing time, averaging 36 minutes and five seconds per game.

“This isn’t an award that I should receive,” said Park. “Last year, I had a feeling I might win, so I was prepared for a speech, but this year, I didn’t. I guess the meaning for this award is to keep working hard.”

Bucheon KEB-Hana Bank point guard Shin Ji-hyun was unanimously selected as Rookie of the Year. The 19-year-old averaged 5 points and 2.7 assists per game.

Woori Bank forward Charde Houston was Foreign Player of the Year, the first time the award has been given. The former WNBA All-Star averaged 16.5 points and 7.4 rebounds per game.