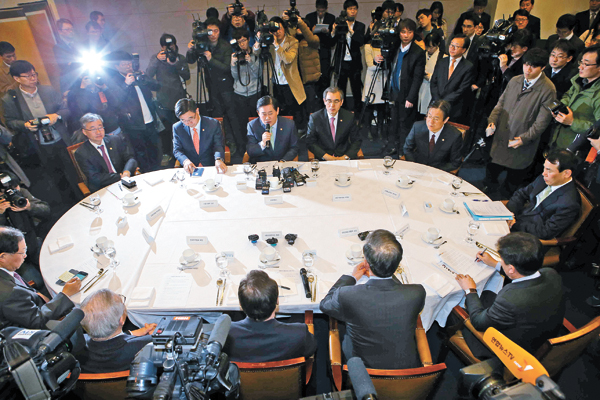 Finance Minister Choi Kyung-hwan, center on the rear side of the table, speaks to the heads of the nation’s five major business lobby groups on Friday at a luncheon held at the Korea Chamber of Commerce and Industry (KCCI) headquarters in central Seoul. By Oh Jong-taek

Following discussion, Choi ended up agreeing with their conclusion that the matter of a pay raise was best left to be drawn up based on negotiations between management and labor.

Ministers and conglomerate heads gathered on Friday to exchange views in an attempt to narrow the divide between the government and the private sector over the minimum wage, salary increases and other economic revitalization measures.

The ministers of employment and labor; and trade, industry and energy attended the meeting, as well as the Financial Services Commission vice chairman.

The closed-door luncheon was held at the KCCI headquarters in central Seoul.

Choi urged private sector leaders to open their pockets to raise overall wage levels and agree with his proposal to raise the nation’s minimum wage, further pushing them to get behind his domestic consumption revival strategy.

The finance minister’s economic revitalization plan centers on overall pay and minimum wage raises this year, which he claims are unavoidable.

His remarks earlier this month came following the release of steadily declining economic data, which saw inflation slow to its worst pace in 16 years and low exports.

“Government initiatives can only have a limited impact on reviving the domestic economy,” Choi said. “Please pay special attention and make an active effort to create positions for young job seekers.

“I hope businesses can raise overall wage levels, which will help the government’s effort to help boost spending.”

“If some conglomerates cannot easily offer pay raises, I hope they can cooperate with our initiative by allowing some of their money to go to small suppliers. This can take different forms, such as compensating them with appropriately raised units,” he added.

However, the business groups maintained their ground, arguing that they couldn’t increase wages prior to government deregulation measures and a labor market overhaul.

“We completely understand the government’s basic policy plan to boost consumption through pay raises, as well as its basic purpose, and we agree with it,” KCCI Chairman Park said in his opening remarks.

He added that “the issue of raising the minimum wage needs to be pushed based on a long-term master plan.”

“Korea is a country in which the wage doesn’t drop once it is raised. So, the raise issue needs significant consideration and discussion.”

According to a dialogue transcript of the closed meeting obtained exclusively by the JoongAng Ilbo, Choi and the leaders of Korea’s business groups engaged in a heated debate regarding the minimum wage.

Conglomerates, in particular, pointed to a raise in the minimum wage as likely to provide a cause for which labor groups would push for further raises.

“Most part-time working college students end up with low-income [work, and still unable to afford tuition and living expenses],” Choi said. “So let’s raise wages for them - even just a little bit - within the minimum wage calculation formula.”

In response to Choi’s remarks, KEF Chairman Bahk offered an example. “If pay raises happen at convenience stores, those small-business owners - who are already squeezed - will further skimp on hiring part time. This makes job creation even more difficult.”

“I’m concerned that those hard-core labor groups may abuse Minister Choi’s remarks about the pay raises,” added one of the five business leaders, who was unidentified.

“Raising the minimum wage definitely helps boost consumption, but at the same time, the results in overall raises of corporate wages, make the personnel cost burden heavier. This eventually leads to a weakening of the corporate competitiveness,” the KCCI chairman said.

Jeong Eun-bo, the deputy strategy and finance minister, confirmed at a later press briefing that the public and private sector discussion ended reconfirming the principle that the availability and size of a pay increase could be determined within the private sector based on negotiation.

He added that this principle also applied to the issue regarding the minimum wage.

“Both the government and business groups agreed with the fact that the minimum wage is something meant to be determined at the Minimum Wage Commission, in principle, which consists of representatives from all interest groups involved.”

But despite stepping back from making promises on a wage increase, they did promise to contribute to the improvement of the economy through new business deals and job creation.

“The conglomerates have agreed to provide larger unit prices to their suppliers in the spirit of mutual growth,” Jeong added.

KCCI Chairman Park acknowledged that “raising overall wage levels or corporate tax can be one way to revitalize the economy.

“But I think it is more crucial to initiate new business projects,” he continued.

After the luncheon, Choi and the five business group leaders promised an imminent follow-up meeting.