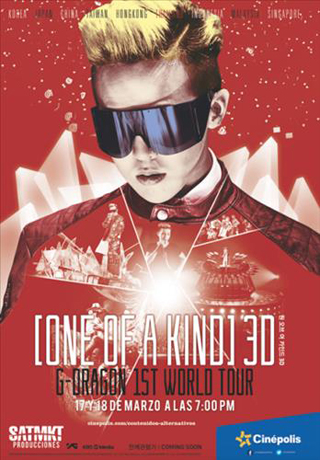 A documentary that follows K-pop singer G-Dragon, of the boy group Big Bang, and his solo world tour will be given a theatrical release in Mexico.

YG Entertainment said Friday that the film is entitled “One of a Kind 3D G-Dragon 2013 1st World Tour” and captures the 27-year-old singer’s 13 world tour concerts in eight countries, starting with a Seoul show that was held in March in 2013.

YG added that the documentary was shot with four cameras and will enable viewers to watch G-Dragon in concert.

The film will be shown at about 20 branches of the Mexican multiplex chain Cinepolis and will be unveiled in other parts of Latin American countries.

G-Dragon is likely to return to the music scene as part of Big Bang next month.