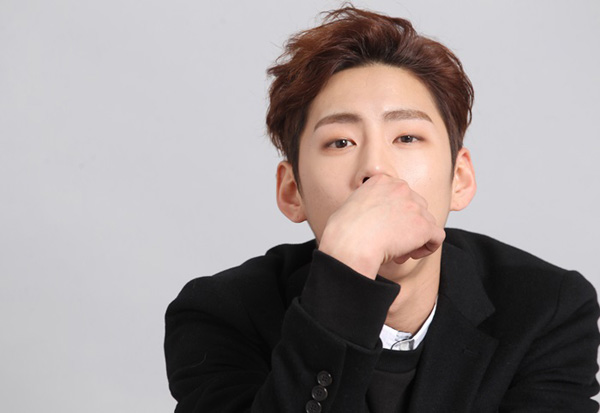 Han Sun-chun was a prodigy with rhythm who grabbed the attention of viewers with his fit body and handsome face when he participated in survival show “Dancing 9” in 2013.

But the 25-year-old has been in the limelight recently as a musical actor rather than a contemporary dancer, appearing in the Korean version of popular Broadway show “Kinky Boots.”

Han played one of the six angels in drag, wearing high heels, palm-sized bikinis and heavy makeup in the musical that staged its finale in February.

He was arguably the actor who stole the most spotlight after Charlie and Lola, two of the main characters in the musical.

Unlike the explosive energy the rising star emitted on stage, Han was rather shy and cautious when Ilgan Sports, an affiliate of the Korea JoongAng Daily, met him for a recent interview.

“I referred to Beyonce’s performances for the coquettish gestures I showed on stage, but in reality, I’m very shy of strangers,” he said.

Q. What was your biggest inspiration for the flirtatious behavior you showed on stage?

A. Beyonce and Megan Fox were my biggest inspirations. I also watched a lot of videos on drag queens. I realized they have their own distinctive style, too, with some who look like real women and others who have bold and masculine traits.

Was it hard to perform in high heels?

My shoes had 12-centimeter (4.7-inch) and 15-centimeter heels. At first, I couldn’t even stand on my own, but as I got used to it, things got easier, and I even started to realize that my legs looked longer. I could partially understand why women wear heels.

How did you come to participate in a musical after “Dancing 9”?

After “Dancing 9” finished, all the participants held a gala show. Its director hinted to me about the musical, saying it would suit me very well. The character was very charming and the role had a lot of choreography, so I auditioned for it.

Participating in “Dancing 9” really broadened my perspective. I used to only take an interest in dancing as a pure art form, but now I realize I can use my skills for other genres such as acting and musicals.

You recently signed a contract with C-JeS Entertainment, which is home to many big stars such as Choi Min-sik, Lee Jung-jae and K-pop group JYJ. How do you feel about that?

While I was practicing for “Kinky Boots,” one of the producers I know arranged a meeting with a C-JeS representative and it worked out well. There was a time when all the members of the agency got together, and I got to see Choi and Lee from a distant. They are still iconic figures to me and everything felt very surreal at the time.

What’s your plan for the future?

I’m going to get down to studying acting. I’m interested in taking part in drama series and movies as well.