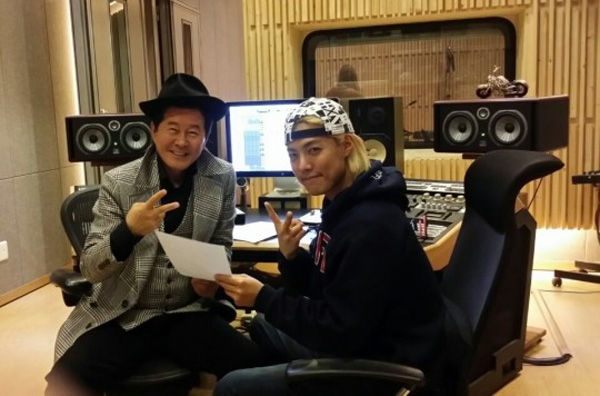 Kang Nam, right, a member of boy group M.I.B., will collaborate on a duet with veteran singer Tae Jin-ah.

According to sources close to Tae, who is often dubbed the king of trot, a genre considered an early form of Korean pop music, he and Kang Nam recently finished recording the song “Traditional Market.”

Trot is usually sung by singers who are over their 50s and 60s in Korea and has a distinct sound. Singers fluctuate their voices irregularly to add a vibrating quality to the music, with a heady nasal sound.

It is not the first time for Tae, who is 62, to join hands with a junior musician, though.

He collaborated with singer Rain last year on “La Song.”

Tae and Kang Nam talked about the project in February when the trot singer appeared on an episode of reality TV show “I Live Alone” with Kang Nam, who is a regular on the show.

Tae proposed forming a one-off group with Kang Nam, and that was the beginning of this project.

Their new song was written and composed by Tae in the hopes of bringing vigor to traditional markets, which are losing their ground due to the omnipresent convenient stores and big-box supermarket chains.

“Tae has a lot of interest in reviving traditional markets,” said an anonymous source with knowledge about the project.