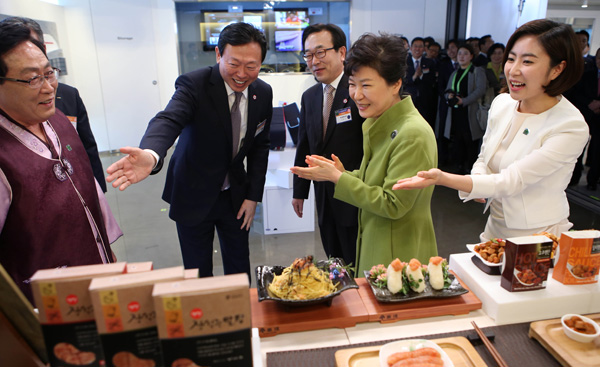 President Park Geun-hye, center, and Lotte Group Chairman Shin Dong-bin, left, attend the launch of Lotte Group’s creative economy and innovation center in Busan on Monday. At the event held at Bexco, Park listens to how a maker of salted pollack roe could benefit from the center’s research. [Joint Press Corps]

Busan has been considered the home of the retail and food and beverage conglomerate as it even owns a baseball club in the city, the Lotte Giants, who are known for having the most enthusiastic fans in the country.

The Busan Center for Creative Economy and Innovation will be dedicated to forging new growth engines such as the online retail and movie businesses.

Located in Centum Green Tower in Haeundae, the new center is also the seventh of its kind to join President Park’s push for a creative economy, which emphasizes the assimilation of innovative ideas, science and technology to develop a growth engine. So far, major conglomerates such as Samsung Electronics and Hyundai Motor have opened their own research centers.

The Busan hub’s major role is to help smaller vendors gain access to more retailing channels by offering a studio where they can make promotional content to sell their items on TV home shopping networks.

The center will also organize a certification system, dubbed Best Innovative Goods, starting in June. Once the center labels a product under the classification, it can be introduced at Lotte Department Stores and Lotte Mart.

Along with the support, the retail group will provide resources to help smaller merchants and companies adopt a digital approach to marketing their products.

The essential concept is to break down the divisions between brick-and-mortar shops and online malls so that consumers can have a seamless shopping experience.

Lotte Group has invested 100 billion won ($88.1 million) into this project, according to a statement jointly released by the Ministry of Science, ICT and Future Planning and the Ministry of Trade, Industry and Energy.

Developing the movie industry constitutes another focus of the center. With a 40 billion won budget allotted, it will support the entire filmmaking process - from pre-production to distribution. The establishment itself will be used as a movie set.

The funding will also go toward building two film theaters for independent, small-budget movies. The move appears to be a response to criticism that the host city of Busan International Film Festival only has one such cinema.

When it comes to the footwear industry, the center will help shoe manufacturers move higher up the value chain given that they may find it hard to be competitive with prices.

The money will be used to promote the designs and functions of shoes.

To keep up with the latest technology advances, the center will conduct research on how the Internet of Things (IoT) concept can be incorporated into Busan’s infrastructure.

IoT refers to a network of physical objects, such as home appliances, that are connected to the Internet.

The Busan center is the latest regional innovation center under the president’s creative economy initiative. Despite skeptical views that the vision is too vague, the administration is going ahead with the drive.

The government plans to launch centers in 17 metropolitan cities and provinces by the end of next June.