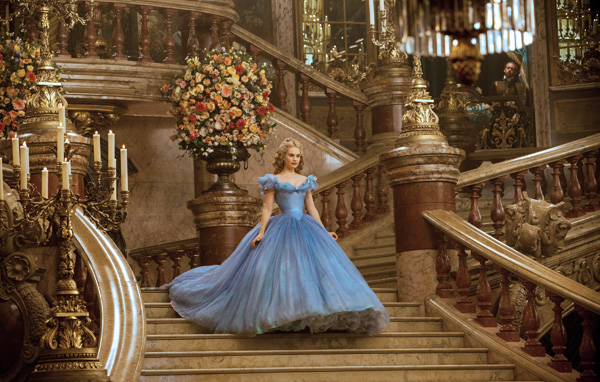 “Let It Go’’ may be Walt Disney’s anthem these days, but “Everything’s Coming Up Roses’’ might be the more accurate theme song for the Disney juggernaut.

Disney’s recent streak continued over the weekend with the $70.1 million North American debut of its traditional, sumptuously costumed fairy tale adaptation “Cinderella,’’ according to studio estimates Sunday. Interest in the film, directed by Kenneth Branagh and starring Lily James of “Downton Abbey,’’ was boosted by a “Frozen’’ short, “Frozen Fever,’’ that played before the feature.

Disney’s box-office surge has been propelled partly by the so-called “halo effect’’ of “Frozen,’’ a sequel to which Disney announced last week. But it’s also been driven by the appeal of seeing Disney cartoon classics turned into live-action fantasies. “Cinderella’’ follows previous live-action hits like “Maleficent’’ (whose May 2014 debut of $69.4 million “Cinderella’’ narrowly bested) and “Alice in Wonderland.’’

The holiday release “Into the Woods,’’ from the Stephen Sondheim musical, added to the live-action trend, and many more are on the way. “The Jungle Book,’’ “Beauty and the Beast’’ and “Dumbo’’ are all coming in live action, as is a sequel to “Alice in Wonderland.’’

Disney has also found big profits in capitalizing on female moviegoers, who made up the largest chunk of “Frozen’’ and “Maleficent’’ fans. The audience for “Cinderella’’ was 66 percent female, Disney said.

“There is seemingly a lot of appetite for these stories to be told, I think, in part because many of them have a female protagonist and we’ve seen there’s significant box-office success that can come by featuring female-driven stories,’’ said Dave Hollis, Disney’s head of distribution.

“Frozen Fever’’ was certainly part of why we’re seeing the kind of success that we did this weekend,’’ Hollis said. “In and of itself, ‘Cinderella’ is absolutely a great, stand-alone experience. But it ends up being a one-plus-one-equals-three thing for the consumer.’’

The success of “Cinderella,’’ which cost about $95 million to make, was international. It made $62.4 million overseas, including $25 million in China. Disney could also celebrate “Big Hero 6’’ becoming the top-grossing worldwide animated release of 2014; the Oscar-winner has made $633 million globally.

With Disney’s high-priced but lucrative ownership of Marvel, Lucasfilm and Pixar, the studio will be flexing its strength throughout 2015 with releases like “The Avengers: Age of Ultron,’’ “Inside Out’’ and “Star Wars: The Force Awakens.’’

“Disney is just a well-oiled machine that is firing on all cylinders right now,’’ says Paul Dergarbedian, senior media analyst for box-office data firm Rentrak. “It’s about this Disney umbrella which encompasses these incredible crown jewel brands they have. ‘Cinderella’ is just the latest example.’’

While Disney was flexing its might, the powers of another box-office force, Liam Neeson, were checked. Neeson’s latest thriller, “Run All Night,’’ a New York crime saga co-starring Ed Harris, opened with $11 million for Warner Bros.

The film’s poor performance marks the weakest debut for the “Taken’’ star as an action film lead. Dergarbedian noted Neeson’s appeal is strongest in PG-13 rated films, while weaker in R-rated releases like “Run All Night’’ and last year’s “A Walk Among the Tombstones.’’