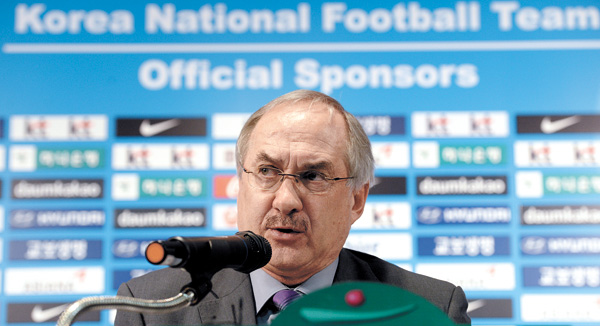 FC Augsburg’s Ji Dong-won and Wigan Athletic’s Kim Bo-kyung have been called up for the first time under national team coach Uli Stielike, who announced the 23-man squad for upcoming friendlies on Tuesday at Korea Football Association (KFA) headquarters in Seoul.

Korea, 56th in the latest FIFA world rankings, will face Uzbekistan on March 27 in Daejeon and New Zealand on March 31 in Seoul.

Compareed to Asian Cup squad in January, there are six new players, including Ji and Kim. The duo played a pivotal role in Korea’s bronze medal in the 2012 London Olympics and will wear the Taegeuk Warriors uniform for the first time since the 2014 FIFA World Cup in Brazil.

“Since their status with their clubs changed in a positive way in the past three months, I decided to call them,” said the 60-year-old German. “I want to see how well they can perform on the national team.” 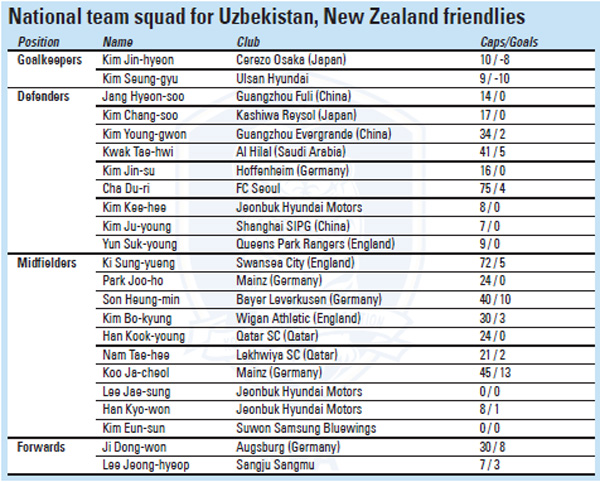 Kim, who played only two matches with his former club Cardiff City in the English Football League Championship, has iimproved since moving to Wigan Athletic in the same league this winter. The 25-year-old midfielder has played full time in the past six games and has two goals in 11 matches in the English second division.

Ji, who moved from Borussia Dortmund to FC Augsburg in the German Bundesliga, also has started six of past seven matches, although the 23-year-old striker has yet to score a goal this season.

Jeonbuk Hyundai Motors attacking midfielder Lee Jae-sung and Suwon Samsung Bluewings defensive midfielder Kim Eun-sun will make their national team debut. They trained with the national team training in Jeju in December prior to the Asian Cup, but were omitted from the final squad.

Jeonbuk center back Kim Kee-hee and Queens Park Rangers leftback Yoon Suk-young also return to the national team. Both missed the Asian Cup - Kim due to military training and Yoon with an injury.

“Since we performed well in the Asian Cup, there was no need to make big changes,” said Stielike. “You can’t select players just because they were good in the past and are familiar faces.”

Experts say the selection of Ji and Kim is in line with Stielike’s philosophy that favors those with steady playing time. That is why Jeonbuk Hyundai Motors striker Lee Dong-gook, the all-time leading scorer in K-League Classic, was omitted. The 35-year-old veteran, who has been hampered by a thigh injury, played about 30 minutes against FC Seoul in a league match Saturday, which was his first official match in five months.

Ulsan Hyundai striker Kim Shin-wook, who also was left off the Asian Cup squad due to injury, was included on a list of six players who would have an opportunity only if any of the 23 members of the squad can’t play.

“Kim’s situation is a little different from Lee’s as he plays more time, but my evaluation was is in not completely fit,” he said. “If we have to replace our forward, Cho Young-cheol will be considered [from the preliminary list] as he shows good performance and gets playing time with his club.

Forward Lee Jeong-hyeop, who plays with the military club Sangju Sangmu, was once again picked to lead the team up front. The 23-year-old was a surprise selection to the Asian Cup and netted two goals.

FC Seoul right back Cha Du-ri is also on the squad. The 34-year-old, who has played 75 matches for Korea, including the semifinal run in the 2002 FIFA World Cup, announced his retirement from international duty after the Asian Cup.

However, Cha will have a chance to say goodbye to his home fans. Stielike said he start against New Zealand and be replaced with two or three minutes left in the half so he be acknowledged by fans.

“Before the announcement, I spoke with Cha and he confirmed again that he will retire from the national team,” said Stielike. “Rather than making him a spectator and having him receive flowers on the field at halftime, I felt it would be better for him to play in an actual match.”