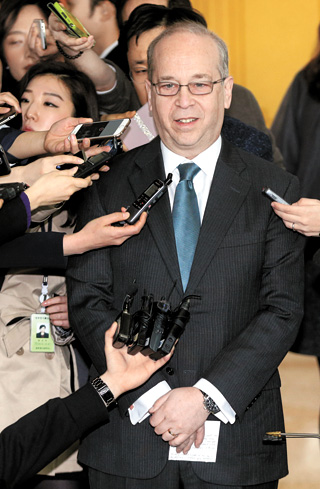 U.S. Assistant Secretary of State for East Asian and Pacific Affairs Daniel Russel speaks to the media after a meeting with senior South Korean officials at the Foreign Ministry in Seoul on Tuesday. By Kim Seong-ryong

The Ministry of National Defense issued a warning to China Tuesday over its attempts to intervene in the possible deployment of a U.S. anti-ballistic missile defense system in Korea.

“Neighboring countries must not try to influence our defense policy,” Kim Min-seok, spokesman of the National Defense Ministry, said during a regular press briefing.

“They can have their own opinions, but we will judge the situation and make a decision based on our own military interests if the U.S. government makes a decision [to deploy the missile defense unit to Korea] and requests a consultation. That is our government’s consistent position.”

Kim’s remarks came as Seoul is being pulled in opposite directions by China and the United States over the Terminal High Altitude Area Defense system, better known as Thaad. As signs grow that Washington will ask Korea to use the system, Beijing has stepped up its pressure on Seoul to steer clear of it.

Thaad is a U.S. missile defense program designed to shoot down missiles closer to their point of origin than current defenses can. Both China and Russia are against deployment of a Thaad battery in Korea because they worry that its radar system, which can cover more than 1,000 kilometers (621 miles), could be used as a method of surveillance against them.

The Ministry of Defense’s Kim expressed rare public support for the Thaad deployment, a change from Seoul’s position that it wants to maintain strategic ambiguity on the issue. The Foreign Ministry and the Blue House go so far as to say that the issue has never even been discussed with Washington.

Kim said Tuesday Korea already told China about its backing for the Thaad deployment to protect against North Korean threats.

“The issue of the Thaad deployment started as a way to deter and counter the intensifying nuclear and missile threats of North Korea,” Kim said. “The Ministry of National Defense will make a decision to defend our people’s lives and safety.”

Kim said Seoul has expressed this position to Beijing. “The government’s stance was clearly delivered to China during the defense ministerial talks between the two countries in Seoul on Feb. 4,” Kim said.

A visiting U.S. senior official also criticized China’s attempts to influence Korea. “I find it curious that a third country would presume to make strong representations about a security system that has not been put in place and that is still a matter of theory,” said Daniel Russel, assistant secretary of state for East Asian and Pacific affairs, on Tuesday. Russel was on his way to meet with his Korean counterpart, Assistant Foreign Minister Lee, when he answered reporters’ questions on Thaad.

He echoed the argument in Kim’s remarks that the Thaad deployment, if made, would be intended to counter the North’s threats, not to spy on China.

“I’m not an expert on ballistic missiles, but I do know that [Korea] and the United States face a significant threat from North Korea’s growing ballistic missile program. It’s a program that North Korea is pursuing in violation of international law and our military authorities have a responsibility to consider systems that would protect the Republic of Korea and its citizens, protect the United States from that threat.

“How they do it, when they do it is something that the experts will have to determine but I think that it is for [Korea] to decide what measures it will take in its own alliance defense and when,” he said.

Asked if he will discuss the Thaad issue with Lee during the meeting, Russel said he originally had no intention to do so, but admitted that it could happen. “The issue, I think, is very much in the public domain now because of the comments of our Chinese colleague yesterday, but that is not part of my agenda,” he said.

Experts blamed the Park Geun-hye administration for having fueled the diplomatic quandary over the Thaad deployment by insisting on “strategic ambiguity.” While the government tried to avoid the issue, China repeatedly made a series of requests to Korea to stay away from the U.S. missile defense regime through various channels, including last year’s summit between Chinese President Xi Jinping and Park and last month’s defense ministerial talks.

As Beijing intensified its pressure, the United States decided to make a move first by announcing last week that it has already conducted site surveys in Korea for a Thaad battery. Provoked by the move, China apparently decided to step up its pressure and Assistant Minister of Foreign Affairs Liu spoke unusually strongly and publicly about the issue.

“Even when the U.S. forces introduced nuclear weapons to the Korean Peninsula, we didn’t have this debate,” a retired general who had worked in the Korea-U.S. Combined Forces Command told the JoongAng Ilbo. The nuclear weapons were withdrawn from the peninsula in 1992.

Thaad should have been approached as a security issue, not a diplomatic issue, he said.

Kim Jong-dae, editor-in-chief of the journal Defense 21 Plus, said Washington started considering the Thaad deployment to Korea in 2013 and the Park administration had two years to prepare for it. “But it failed to use the time wisely,” he said.

Another former diplomat criticized the Park government’s use of the term “strategic ambiguity.”

“The United States and China can both have doubts,” he said. “When you cannot have a candid conversation, how can it be called a healthy alliance?”

Others said the time has come for the Park government to become more decisive, expressing suspicions that the information sharing and policy coordination among the Blue House’s National Security Council, the Foreign Ministry and the Defense Ministry were probably insufficient.

“If we need Thaad, the National Security Council must make a decision and express our intention to the United States and make aggressive efforts to persuade China,” said Moon Chung-in, a political science professor at Yonsei University.

“Indecisiveness was often packaged as strategic ambiguity in the past,” said Prof. Kim Hyun-wook, head of the Department of American Studies at the state-run Institute of Foreign Affairs and National Security in the Korea National Diplomatic Academy. “We must make a decision that will heighten the strategic value by carefully calculating when to move forward and when to step back.”