For Korean food exports, FTA a recipe for success

For Korean food exports, FTA a recipe for success

Before the initialing of the Korea-China Free Trade Agreement (FTA) was completed at the end of February to include changes for agricultural products, fisheries and processed food, Korean companies feared an influx of cheap Chinese food.

Now, even though not many food products are subject to tariff elimination, analysts say the FTA will be a turning point for local producers because Korean food gets wider access to the Chinese market thanks to changes in import and hygiene regulations.

So far, exports of Korean raw milk and kimchi have been banned due to the Beijing government’s strict - and somewhat unfair - food safety guidelines.

Exports of raw milk and kimchi are likely to resume as early as June, said Korean government officials two days after the Korea-China FTA was completed.

According to the Ministry of Agriculture, Food and Rural Affairs, the Chinese National Health and Family Planning Commission on Feb. 11 announced it would adjust sanitary criteria for fermented food products to meet international standards, which recognize coliform bacillus as safe for consumption. 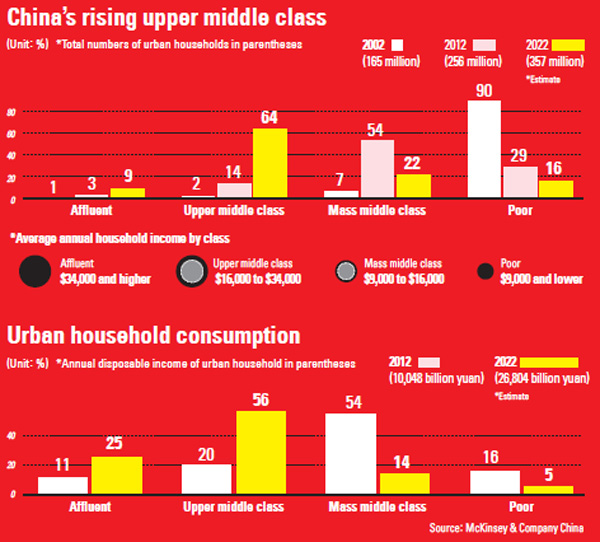 Since 2004, China has lacked a separate sanitary standard for Korean kimchi and placed it in the same category as the Chinese pickled vegetable called pao chai, which contains no coliform bacteria because it is pickled after boiling.

In 2009, the Korean government demanded a separate standard for kimchi, which is made from seasoned and fermented unboiled napa cabbage. Exporters instead had to sell stir-fried kimchi.

However, exports were suspended at the end of 2013 after the Chinese sanitary authority applied a stricter standard because it had no separate sanitary inspection rule for the Korean milk processing method, which uses a higher temperature than the Chinese method and results in a later expiration date. 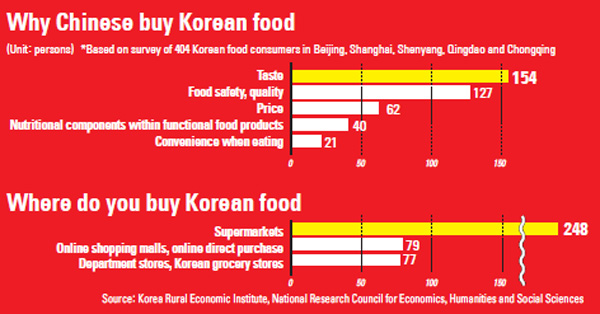 Earlier this year, thanks to the Korea-China FTA, Chinese sanitary inspection officials visited Korea to observe the processing facilities of the nation’s seven major dairy companies, including Seoul Milk, Maeil Dairies and Namyang Dairy, and obtain quality and processing documents.

“Many of Korea’s hit agricultural export items [like kimchi and fresh milk] weren’t included on the FTA’s tariff reduction lists, but those excluded items will indirectly benefit from trust between the two trade partners,” said Kang Hye-young, head of export promotion at the Agriculture Ministry.

The Chinese state-run retail chain plans to open more Korean premium food stores in Beijing, Shanghai, Shenzhen and Guangzhou by the end of the year.

“The store currently doesn’t carry fresh produce or raw meat as the revised inspection rules haven’t officially gone in effect yet,” said Kang. “It carries about 300 processed foods that are strictly Korean-made, including powered milk, baby food, and red pepper and soybean pastes. But soon there will be fresh products.

“We plan to collaborate with traditional Korean food masters to sell their kimchi, red pepper and soybean pastes, and soy sauce at Chinese department stores.”

Early this month, CJ Cheil Jedang reached an agreement with the World Kimchi Research Institute in Gwangju for joint R&D projects to enhance quality competitiveness against kimchi produced in other countries.

The nation’s largest kimchi makers, including Daesang FNF, Dongwon F&B and Pulmuone, plan to expand production in response to the resumption of exports.

In addition to milk and kimchi, the Korea-China FTA is expected to benefit a variety of other fresh food products.

Many analysts see the growing Chinese middle and affluent classes as the primary buyers of Korean food, which is seen as safer, better and tastier than local choices.

“As the Chinese population with a high-income [at least $16,000] has steadily risen for the past decade, food sanitation has emerged as one of the most significant values,” according to a report by the state-run Korea Rural Economic Institute (KREI). “With the trend, the high income population’s interest in quality food and organic food has grown sharply.”

The report explained that Korean food has the advantage of proximity - which minimizes transportation time and costs - and upper-middle and affluent classes prefer online direct purchases, mostly of dairy and nutritionally enhanced food products.

According to data from McKinsey & Company, over the past decade, China’s upper-middle and affluent classes accounted for 17 percent of total urban population in 2012. In 2002, they were just 3 percent.

The market analyst estimated high income households will be 73 percent of the population in 2022 as China’s gross national income rises.

“China’s expanding upper middle class is much more outward-looking than the broad swath of Chinese citizens - a dramatic break from the past that has broad implications for their consumption behavior,” Gordon Orr, director and chairman of McKinsey Asia, wrote on his blog. “This group is much more willing to buy foreign brands. Foreign-branded food and beverages are favored by 34 percent of upper-middle class urbanites, compared with 24 percent of all city dwellers.”

With such a bright forecast for premium Korean food products, analysts are hustling to study the Chinese market and determine whom to target.

The KREI in February published a report with the National Research Council for Economics, Humanities and Social Sciences to provide consumer information about the Chinese market for small farmers and food companies.

“Consumers who participated in the survey also said imports of Korean beef, milk, red pepper paste and yuja marmalade tea will increase when the Korea-China FTA takes effect at the end of this year,” wrote Jung Jung-gil, a KREI researcher. “As the FTA reduces tariffs and eases import procedures at customs offices in the two countries, Korean food exports to China will quickly gain momentum.”

According to another KREI survey of 400 Chinese consumers of Korean food products in the country’s five major cities - Beijing, Shanghai, Shenyang, Qingdao and Chongqing - the most-mentioned reason for choosing Korean food over local food is taste, followed by safety and quality, price, nutritional content and convenient packaging.

In the report, Jung emphasized the Korean food industry should target high-income earners, saying the higher the annual income, the more likely they will pay for premium Korean food products, particularly fresh milk, ginseng, red ginseng and some nutritional snacks.

However, Korea needs to focus its food marketing and promotion efforts on inland China, Jung emphasized, because brand recognition of Korean food is already high in the large coastal cities.