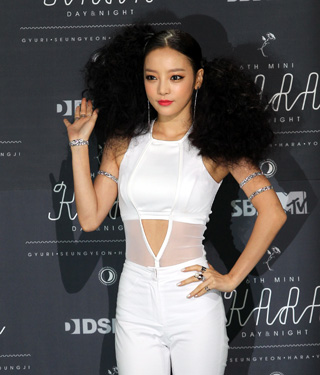 Goo Ha-ra, a member of the girl group Kara, will host the TV show “A Style for You.”

KBS, the broadcaster of the show, said Wednesday that “A Style for You” will also feature other K-pop celebrities, including Kim Hee-chul of Super Junior, Bora of Sistar and Hani of EXID.

Various missions will be given to the four hosts such as analyzing street fashion trends or living without a stylist for a week.

Goo and the other three hosts have already finished recording the first episode.

During the first shoot, Goo reportedly said she is into “natural styles with a little bit of femininity.”

Goo debuted in 2008 as a member of the girl group Kara.

With many hits under their belt such as “Mister,” “Pretty Girl” and “Lupin,” the girl group reached its height in and outside of the country, especially in Japan, years ago, but came across a series of trials soon after.

The group was on the verge of breaking up in 2011 because of financial issues with its agency.

Later, Nichole and Kang Ji-young, two members of Kara, walked out of the group in 2013 and 2014, respectively.