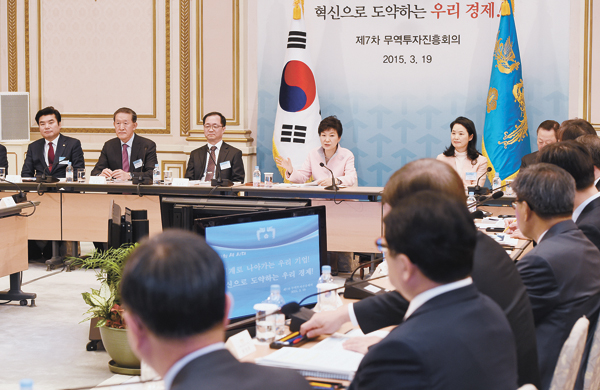 The Park Geun-hye government pledged on Thursday to boost the nation’s stagnant economy by expanding business with countries in the Middle East.

Approximately 200 cabinet ministers, lawmakers and business leaders gathered Thursday for a seventh round of discussions on boosting trade and investment, which was hosted by the president at the Blue House in central Seoul.

During the meeting, she shared the government’s plans to support overseas businesses and investment following her trip earlier this month to the Middle East. The president also expressed her hope for kindling a “second boom” in the region.

The Korean government aims to take advantage of new industries that are expanding in the region as many Middle Eastern nations now face a “post-oil” era and are searching for new business opportunities amid plummeting crude prices.

“Middle Eastern countries … are striving to diversify their industries, focusing on new industries and the services sector,” Finance Minister Choi Kyung-hwan said at briefing in Seoul following the discussion. “The total size of their projects is estimated to be worth $764 billion by 2017.”

One goal is to encourage Korean builders to win lucrative construction orders in the region and involve them in the entire development process, from construction to operation.

By 2017, Korean builders aim to win overseas construction orders worth $80 billion, according to the Ministry of Strategy and Finance.

Bringing in research and development (R&D) specialists was also mentioned, specifically through a visa that grants permanent resident status to foreign researchers who work in Korea for a global company that has invested heavily in Korea.

“The second Middle East boom is expected to be an opportunity to open the door for young people with high value-added specialties in fields like nuclear energy, [medicine] and IT,” he added.

Choi’s comments came a day after official government data showed that Korea’s youth unemployment rate had hit its highest level in 16 years, at 11.1 percent in February.

According to state statistics, in 2014 only about 5,000 young Koreans were employed abroad. Choi said the government hopes to double that figure by 2017.

Starting this year, the government will also begin work to increase the number of “smart plants” nationwide to 10,000 by 2020. A smart plant controls all aspects in an item’s production process, from marketing and manufacturing to delivery and sales.