Some prices at Ikea are eye-popping

Some prices at Ikea are eye-popping 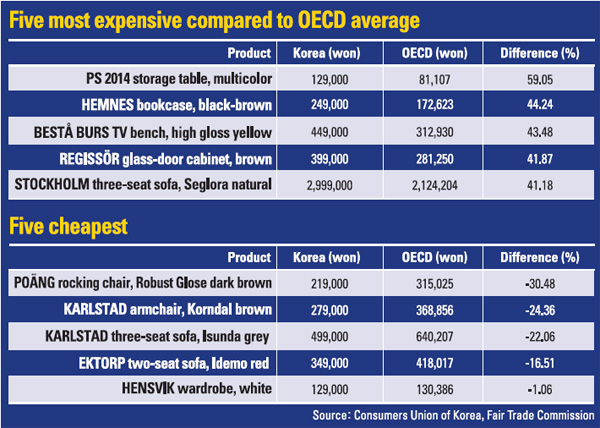 Koreans pay more for their Ikea furniture than any other developed nation other than Sweden, a study by a consumer group showed.

Even before the Swedish retailer opened its biggest store in the world in Korea in December, rumors swirled that the prices would be a rip-off.

For many Ikea offerings, that has proven to be the case.

According to a study released Thursday by the Fair Trade Commission and the Consumers Union of Korea (CUK), 44 products at Ikea’s Gwangmyeong store had higher price tags compared to average prices in 21 Organization for Economic Cooperation and Development (OECD) member countries.

Five products were cheaper than the OECD average.

The study was taken at Ikea stores on and offline for a month starting after the opening of the Ikea Gwangmyeong store in mid-December.

Of 21 OECD member countries, Ikea prices overall were highest in its home country of Sweden, followed by Korea, Australia, the United Kingdom, France and the United States.

When each country’s purchasing power was factored in, the highest prices were in Hungary, Poland, the Czech Republic and Korea in fourth place.

The product with the largest price gap in Korea was the PS 2014 storage table selling for 129,000 won ($115) in Korea. The table, which was inspired by stacked dim sum steamers, was 59 percent more expensive in Korea than the OECD average of 81,107 won.

Other products including a bookshelf and sofa had a nearly 40 percent price gap.

But some products like a rocking chair and armchair are selling here for almost 30 percent cheaper than the OECD average.

The CUK admitted that prices at Ikea’s Gwangmyeong store are 37.4 percent cheaper than when Koreans had to source Ikea products via independent importers before the Ikea store opened.

Even before the consumer group took the survey, a group of consumers opened an Ikea product price comparison website called “Hogang No No.” “Hogang” refers to clueless customers who pay too much when there are cheaper ways to buy the same product.

Ikea Korea released a statement saying the CUK study was based on a small numbers of products and that it was unfair to compare prices in different countries.

“As to the survey conducted by CUK, it seems difficult to draw a conclusion from research on 49 Ikea products from the 9,200 Ikea products offered here in Korea,” wrote Ikea Korea. “It would be more reasonable to compare Ikea Korea product prices to the Korean home furnishing market.”

The company said it sets prices differently in every country based on various factors including the currency, local taxes and retail systems and local market surveys.

At a meeting with the group, the company told the CUK that only three to four products in the 49-product list sell well in Korea, the company said.

Thursday marked the 100th day since the opening of Ikea’s store in Gwangmyeong, Gyeonggi. The company released its own survey of 500 customers, in which 88 percent of respondents said that Ikea prices in Korea are low and affordable.

Ikea, the world’s largest furniture chain, has 365 stores in 47 countries, and last year generated worldwide sale of 37 trillion won. The company plans to open four more stores in Korea by 2020.