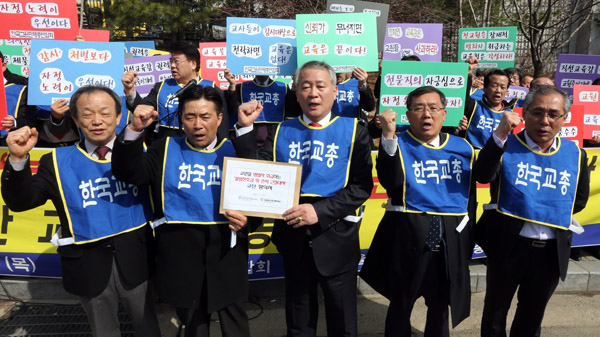 Members of the Korean Federation of Teachers’ Associations (KFTA) on Thursday protest a recent order by the Seoul Metropolitan Office of Education that prohibits teachers from accepting bribes from parents, saying that it regards all teachers as “potential perpetrators.” By Kang Jung-hyun

The country’s largest right-leaning education organization on Thursday denounced an order issued this week by the Seoul education authority that strictly prohibits teachers from accepting bribes from parents, otherwise known here as chonji.

On Sunday, the Seoul Metropolitan Office of Education issued a press release announcing that bribery would not be tolerated in any form and that any person who reported a teacher accepting gifts or cash would be given a reward ten times the amount of the kickback, up to 100 billion won ($89.4 million).

“Given that teachers are required to have a relatively higher level of morality, we’ve been making efforts to create a more transparent culture by establishing an ethics charter in 2005,” KFTA Chairman Ahn Yang-ok said at a rally Thursday morning in front of the capital city’s education office. “The overall majority of teachers are not accepting chonji at all.”

“But the Seoul Metropolitan Office of Education has issued provocative press releases saying they would discipline even those who accept 10,000 won and have disgraced all teachers,” he continued. “Cho must apologize and come up with countermeasures.”

The Seoul’s education office explained that when it announced the new regulation, it merely intended to reassure parents so that they wouldn’t agonize over bringing in a gift for their child’s teachers.

The new regulation also demands that schools not disclose the home addresses of its teachers and send text messages to parents explaining that bribery will not be allowed. Educators are only allowed to accept gifts that do not exceed 30,000 won and only at public events like Teachers’ Day or graduation ceremonies.

Sunday’s announcement came after the educational authority announced in August that it would not refrain from severe disciplinary action, including expulsion or dismissal, in instances in which teachers accepted money and valuables worth 100,000 won or more.

The declaration quickly became contentious, specifically because the standard was even stricter than the anti-corruption bill passed by parliament earlier this month. The act calls for government employees, including teachers, who receive 1 million won at a time or 3 million won in a month to be penalized.

Though many parents welcomed the decision, claiming that there are some teachers who outright demand cash or gifts, most teachers seemed to think the regulation was too much.

That became more evident after the education office uploaded a one-minute video clip filmed in December showing a child crying in a classroom after witnessing teachers accepting bribes from parents.

The education authority sent the video to schools to be used in teacher-parent sessions.

“I felt ashamed when I watched the video,” said one 54-year-old elementary school teacher surnamed Jin. “And it was also very uncomfortable because I don’t think the education office had to do this to root out chonji.”