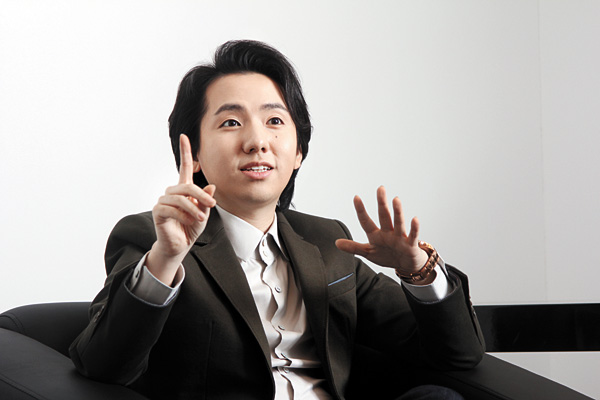 Operatic pop tenor Lim Hyung-joo will deliver a special lecture to Harvard University students next month on the school’s campus in Cambridge, Massachusetts, becoming the youngest Korean to be invited to take the distinguished rostrum.

The 28-year-old classical crossover singer, who has 15 albums under his belt, will fly to the United States for his lecture scheduled on April 23, Lim exclusively told the Korea JoongAng Daily.

As the promotional ambassador of the 2015 Summer Universiade, which kicks off in Gwangju on July 3, Lim said he will touch on a number of topics during the hour-long lecture, focusing on the multi-sport event for student athletes, and conclude with a mini-concert.

Joining him will be Gwangju Mayor Yoon Jang-hyun, 65, the head of the event’s organization committee.

“It’s definitely nerve-racking because I’ll have to speak in English,” Lim said. “But I’ve realized through all the lectures I’ve delivered to local college students that native pronunciation isn’t what matters the most - it’s more about authenticity, and that’s what sends a sincere message to listeners.”

Lim, who debuted at the ripe age of 12 and is now into his 18th year in the music scene, added that the worst lecturers are those who brag about their track records and glorify their ordeals.

“I try to be as candid as possible,” he said. “You’ll get nowhere by trying to take advantage of special lectures as an ‘image making’ tool.’”

On April 24, a day after speaking at Harvard, Lim will drop by Boston University to talk with Korean students there for a similar itinerary. The discussion will center on his personal career and how he grew to become Korea’s most renowned classical artist.

Having sold more than 1.2 million records worldwide, Lim was only 17 years old in 2003, when he held his first overseas solo concert at New York’s Carnegie Hall, the same year he sang the national anthem at former President Roh Moo-hyun’s inauguration ceremony.

Better known here as the “president’s boy,” Lim has sung in front of every Korean president except three - Syngman Rhee, Park Chung-hee and Yun Posun, who are all deceased.

“I have probably been to every room in the Blue House except the president’s bedroom,” he said. “The first time I set foot there was when I was 12, and I still feel so honored to frequent a place most others never get to see in their lifetimes.”

Other than his singing prowess, Lim said he thinks the “clean reputation” he has built in the music industry is another core reason why he’s a top priority at state events.

“Classical music tends to come off as elegant and graceful, and it’s not detached from the general public as well. I have a strong foothold in charity and I’ve managed to get this far without a scandal, so I think those aspects prove to be my merits as a guest singer.”

Earlier this year, it was announced that Lim had been chosen as the recipient of the U.S. Presidential Culture Awards for his contributions to mending ties between South and North Korea. And once again, he is the youngest Korean to have that honor.

The pop tenor has held numerous concerts commemorating national anniversaries recognized by both countries, such as the outbreak of the 1950-53 Korean War.

In 2010, Lim held a concert at Carnegie Hall to mark the 60th anniversary of the war. All proceeds went to the United Nations, which later distributed them as scholarships to the relatives of Korean War veterans.

Lim will receive the award next month in Washington.