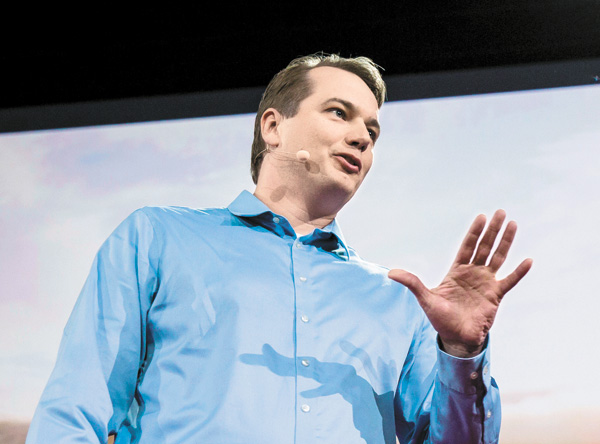 VANCOUVER - Chris Urmson, director of self-driving cars at Google, said at the Technology, Entertainment and Design (TED) conference 2015 on Tuesday that although his 11-year-old son would be able to drive in 2020, his team members “are committed to making sure that doesn’t happen.”

Urmson was one of the high profile speakers at the TED 2015 conference. He has risen to become an important figure in the automobile industry with his refusal of the traditional concept of driving.

Chris Anderson, curator of the TED conference, introduced the Google director as one of the guests who best fits the conference’s theme of “Truth and Dare.”

In 2010, Google became the first company to successfully test a driverless car on a public road. After securing several patents for in the field, the company is now pushing for the commercialization of its project.

By the end of this year, Urmson’s team plans to test-drive a two-seat car on a road in Mountain View, California, where Google headquarters is located.

So far, the short test drives have been carried out on roads near Google headquarters, but the test at the end of this year will be longer.

Google’s driverless car has no steering wheel or pedals. At the TED conference, Urmson showed a video of the vehicle’s 3-D GPS system, which can detect the location and movement of vehicles, pedestrians, and obstacles on the road and sidewalk.

The cutting-edge ability to detect objects, even if they appear suddenly in front of the car, is thanks to a special device called “LiDAR,” a laser-sensor on the roof of the car that estimates distances between the car and nearby objects.

In order to encourage people to try out the new car, Urmson sought to demonstrate a shift in our usual idea of driving. He claimed that driverless cars are safer than those with a driver.

“We’ve been working around the least reliable part of the car: the driver,” he said.

The TED conference 2015 was held in Vancouver from March 16 to 20, with high-profile speakers representing the “truth” in fast-changing industries and the “dare” in innovation.

JoongAng Ilbo was invited as a guest and was able to experience events on the sidelines of the conference, including the test-driving of Toyota’s ultramini electric vehicle, the i-Road.

The 2.3-meter-long (7.5-foot-long), 1-meter-wide two-person car leans like a motorcycle when cornering but never falls, despite having only three wheels. A JoongAng Ilbo reporter had to wait for two days for an opportunity to test drive the car because it had drawn so much attention from conference participants.

When a reporter was finally able to drive the i-Road, it was clear that the car was designed to avoid urban traffic congestion, similar to a motorcycle. Although its maximum speed is 60 kilometers (37) per hour, its compact size is a strong point for parking. While other electric cars must be charged at a designated station, the i-Road can be charged at home with a simple plug. But although it is designed for two passengers, the space is narrow even for one person.

Toyota chose to display the i-Road at the TED conference because it developed the car as an alternative to mass transportation. The concept was not designed as a car that would be bought for personal use, but more like a bicycle that can be borrowed anywhere and at any time.

“For a short distance such as from your home to a subway station, the i-Road could be the most suitable vehicle,” a Toyota official said.