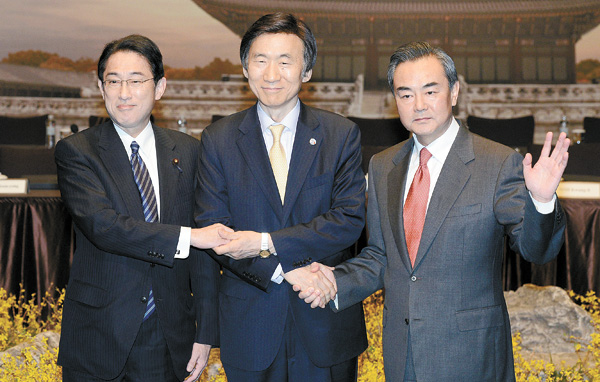 Foreign ministers Yun Byung-se of South Korea, center, Wang Yi of China, right, and Fumio Kishida of Japan pose for a picture before their first trilateral meeting in Seoul on Saturday. Through their first such meeting in three years, the three top diplomats agreed to work together to host trilateral summit meetings of their leaders “at the earliest convenient time”. [Joint Press Corps]

Top diplomats from South Korea, Japan and China reached an agreement Saturday to work together to hold a summit meeting of their leaders “at the earliest convenient time.”

Saturday’s talks by foreign ministers Yun Byung-se of South Korea, Wang Yi of China and Fumio Kishida of Japan marked the first such meeting in three years, during which time there has been growing anti-Japan sentiment in Korea and China over moves by the administration of Japanese Prime Minister Shinzo Abe to obscure and whitewash wartime atrocities in the first half of the 20th century.

Korea-Japan relations have deteriorated to the point where President Park Geun-hye, in her third year at the Blue House, has never had a summit with Abe.

“Based on the accomplishments achieved through this meeting, the three ministers decided to continue their efforts to hold the trilateral summit at the earliest convenient time for the three countries,” read the joint statement.

During a press conference, Wang of China said that while World War II has been over for 70 years, lingering problems related to Japan’s wrongdoing remain “as a present issue, not an issue of the past.”

He added that while such issues exist, they should not negatively affect the future of trilateral relations.

While the three men stressed holding a summit at the earliest convenient time, Wang’s remarks led many to speculate that whether such a meeting takes place largely depends on how Tokyo responds to the lingering suspicions of its two neighbors about how it views past misdeeds, including its brutal colonization of the Korean Peninsula and invasion of eastern China during the first half of the 20th century.

Abe and his Cabinet have angered his counterparts in Seoul and Beijing many times in recent years by visiting the Yasukuni Shrine that honors Japanese war dead, including wartime criminals who were hanged.

In a clear indication of her dissatisfaction with Abe’s ambiguous position on wartime brutalities, Park has not met one-on-one with the Japanese leader since taking office in 2013. During that time, she has met with Xi Jinping of China on five occasions.

The deepening rift between Seoul and Tokyo has caused concern for Washington, which wants a strong alliance between the two neighbors to counter Beijing’s growing dominance in the region.

The first test of Japan’s readiness to reflect demands from China and Korea is likely to be Abe’s address to a joint session of Congress next month during his visit to Washington.

It will be the first time a Japanese leader has been given such an honor. Abe’s speech comes 74 years after a joint session of the Senate and House of Representatives approved a declaration of war against Japan following the surprise attack on Pearl Harbor.

Washington’s invitation to Abe is widely seen as an attempt by Washington reinforce relations with Tokyo to counter the expanding influence of China.