Lee Min-ho and Suzy are a couple

Lee Min-ho and Suzy are a couple 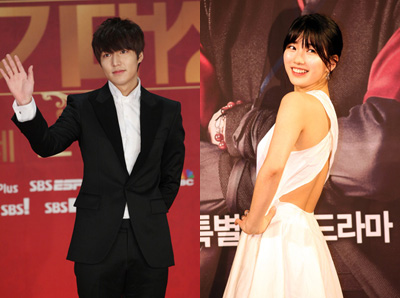 Asian heartthrob Lee Min-ho and Suzy, who fans refer to as the nation’s first love, have started dating.

Local online news agency Dispatch ran an exclusive story Monday about the two A-list entertainers going on dates in Seoul and London when their schedules allow.

After the reports, Lee and Suzy’s agencies immediately confirmed their relationship.

“They have been seeing each other for a month,” said Lee’s agency Star Haus Entertainment. The actor is often called the Asian prince because of his tremendous popularity in Asian countries, especially China.

Suzy debuted as a member of girl group Miss A in 2010 but she was given the nickname the nation’s first love after she appeared in the 2012 hit film “Architecture 101,” in which she plays the first love of a male protagonist.

Since the movie, Suzy has been acting in many films and drama series.

According to Dispatch, Lee and Suzy began dating in February and they recently spent three days together in London after the two finished working in Paris and London, respectively.

Lee and Suzy left for Europe on March 10 and Lee flew to London after finishing work on March 15 to meet his girlfriend.

Dispatch added that Lee and Suzy also met up almost every day in Seoul since Feb. 23.

Suzy will return to the music scene next month as part of Miss A.