The promise that Park didn’t keep

The promise that Park didn’t keep 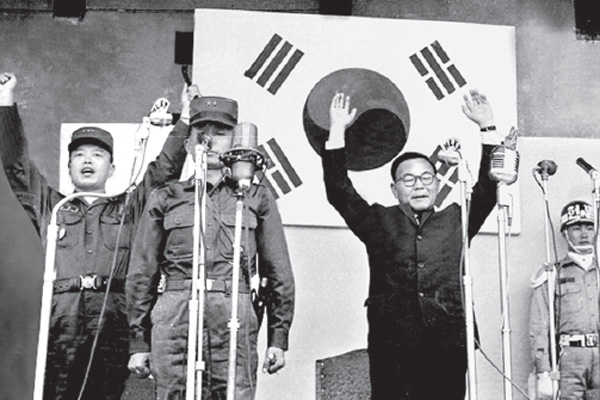 Park Chung Hee, second from left, watches a rally in which 70,000 people supporters of the May 16 military coup in the now-demolished Seoul Stadium, with former President Yun Bo-seon to his right on June 12 in 1961. It was the first time Park appeared before the public without sunglasses after the coup. Provided by National Archives of Korea

This is the ninth in a series of articles on the life and times of Kim Jong-pil, a two-time prime minister, based on extensive interviews with the 89-year-old. This installment describes Kim’s meeting with Park Chung Hee a day before the May 16 military coup, which Kim calls a revolution, when Kim showed the former president a draft of a declaration of promises to the nation. Park insisted on the addition of a clause that promised that he and the other soldiers involved in the coup would return to the military once a new civilian government took power.

It was cloudy on May 15, 1961, the day before we carried out our military revolution. I wore the military uniform that I had been stripped of three months earlier. I had a loaded pistol in my waist holster. I headed to Park Chung Hee’s house. I needed his final approval of the statement of promises to the people that I had drafted in which I prioritized anti-Communism as the No. 1 policy objective.

Park carefully read my draft and said, “It’s all good.” He did not change a single word.

But he suggested we add one more clause. He wanted to officially state that he, along with other military officials behind the revolution, would go back to the military once a civilian regime took power following a brief period of control by the revolutionary force that would work to bring stability to the country. 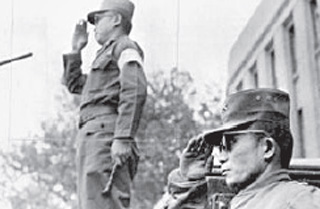 Park Chung Hee, right, then-vice chairman of the Supreme Council for National Reconstruction, and Chang Do-young, chairman of the council, salute military academy cadets who organized a street march in support of the May 16 military coup on May 18, 1961. Park became known as the sunglass-wearing strongman. [JoongAng Photo]

During my preparation for the revolution, the notion that Park and I would return to the military had never crossed my mind. We were talking about changing the status quo from head to toe by dismantling the top leadership not only of the military but of the whole country. I thought once we succeeded in our plan there would be no way back but only forward - with us governing.

I was certain that if we pulled back and returned to the military it would certainly cause instability. Also our determination to put our lives on the line for the success of the revolution would be weakened if we declared we would simply go back to what we did before the revolution. There was no choice left for us but to charge forward. For many reasons, I did not like Park’s idea.

But Park was insistent with his rather naive idea. He wanted to convince people that he wasn’t overthrowing the government out of his greed for power but from his desire for a better country. So he wanted to state to the people his plan to go back to the military once he stabilized the country.

Knowing his intention, I agreed to put that promise in the declaration. But I thought to myself that the clause would have no effect in reality. In the years after our May 16 revolution, that clause became a political liability for Park.

Park also suggested we put then-Army Chief of Staff Chang Do-young as our revolution leader and release the declaration in his name.

“With my current stature [in the military], I can’t be at the forefront of the revolution,” said Park.

I expressed my objection.

“I have known General Chang for many years,” I said.

“He is just not a person we can trust.”

On April 10, Park asked me to bring the blueprint for the military revolution to his house. I brought documents detailing our plans for the revolution. If leaked, those documents would have exposed our every move. Looking at the scheme, Park said, “I will show this to General Chang and ask him to lead the revolution.”

I objected. “That will be like asking the military to arrest us on charges of plotting a coup,” I said.

But Park had deep trust in Chang after years of friendship. While Park was six years older than Chang, he was junior to him in military rank. It was Chang who reinstated Park as a major in 1950 and helped Park have a smooth ride in his military career.

I served Gen. Chang at the outbreak of the Korean War in 1950. I was aware of his leadership, intellect and prudent sense of judgment. But we were starting a revolution to overthrow the government with our lives at stake. In my judgment, it wasn’t clear whether Chang would stand with us. He could simply turn our plans over to the authority and get us all busted.

As I handed over the blueprints to Park, I told him, “You have to get them back from Chang in three days no matter what. If leaked, it would get all of us killed.” Park said he would do as I suggested. That day, Park visited Chang and gave him the plan.

I never got those documents back from Chang, who showed no sign whether he was with us until D-Day.

Park insisted on putting Chang at the forefront because he thought he would fail to have a firm grip on the military because of his past record as a convicted follower of Communism. Besides his troublesome past, he believed Chang’s stature within the military as Army Chief of Staff was what was needed in the post-revolution period to assume firm control.

I was aware of Park’s past record, and that was why I made anti-Communism the revolution’s No. 1 priority in its declaration of promises to the nation. Park thought that wasn’t enough and tried to bring Chang over to our side.

On the afternoon of May 15, I had the final version of the declaration. Everything was prepared and everyone involved in our plan was ready to take action. I waited for midnight. I put my life in the hands of God.

At 11:30 p.m., Park and I left his house for the fateful hours to come and got into a jeep. As we began driving, I saw two black jeeps parked nearby. It was the military police. Our plan had been leaked. Nevertheless, we moved forward. No one could stop us at that point. It was a revolutionary night.