Sejong Center on track to stability

Sejong Center on track to stability 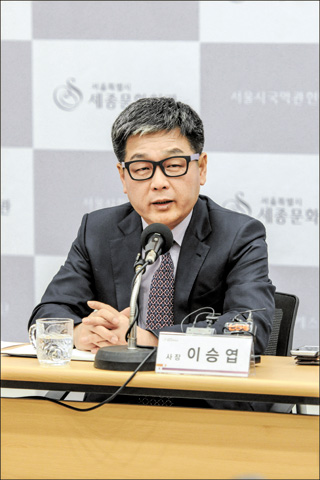 Lee Sung-yeop, newly appointed president of the Sejong Center for the Performing Arts, speaks during the press conference on Tuesday.Provided by the center

Sejong Center for the Performing Arts’ newly appointed president, Lee Sung-yeop, said he’ll transform the city-run arts complex into a landmark for arts in Seoul that “Seoulites want to boast about.”

At a press conference held at the arts complex on Tuesday, the 53-year-old self-described “arts management expert” said he’ll raise the brand value of the center to make it the premier performing arts center in Korea.

The strategy that Lee announced on Tuesday after his appointment on Feb. 11 was not new. However, he stressed that grandiose plans would be meaningless if the groundwork isn’t set properly and added that his focus will be on stability.

“My strategies and vision may sound like a cliche,” Lee said. “But Sejong Center for the Performing Arts has been insecure for many years and has been covered by the media not for arts news but for other unpleasant issues. The center looks glamorous from the outside but when I came and looked from the inside, I realized that there are many scars and the whole atmosphere is depressed.”

To liven it up, Lee said the center needs to live up to its purpose.

Currently, only 30 percent of performances held at the Sejong Center are put on by in-house companies, and Lee said he hopes to increase that number to 50 percent.

Lee graduated from Seoul National University with bachelor’s and master’s degrees in French Literature and received a graduate degree in cultural policy and art administration at Bourgogne University in France. He worked for the Seoul Arts Center from 1987 to 2001.