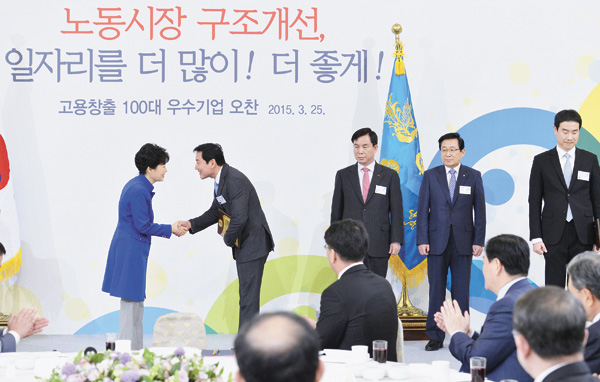 President Park Geun-hye presents an award to a representative of one of the companies that contributed to the nation’s campaign to increase job opportunities at the Blue House on Wednesday. [NEWSIS]

Hyundai Motor and Kia Motors held their fourth annual job fair for partners Wednesday as part of efforts to promote shared growth in the auto industry.

About 360 companies associated with the nation’s two largest automakers, including auto parts manufacturers and raw material suppliers, participated in the fair at COEX in Samseong-dong, southern Seoul, and 17,000 people were expected to be hired. More than 50,000 people got jobs through the past three fairs.

“We have been managing this job fair since 2012, as we know the growth of partners eventually will make everyone grow,” said Yoon Yeo-chul, vice chairman of Hyundai Motor. “We will continue trying to contribute to the society by helping businesses in the car industry create more jobs.”

During the fair, a series of employment consulting programs will be offered, including interview and resume writing skills. A booth for free identification pictures is provided, since most Korean companies require applicants to attach a photo to their resumes.

Many companies participating in the fair are financially stable and offer relatively higher salaries than other small and midsize companies.

Daewon Kang Up, which has been supplying parts to Hyundai Motor for more than 30 years, offers about 39 million won ($35,380) of annual salary to a rookie, which is about 9 million won higher than the amount set for liberal arts majored rookies in CJ Group.

As the recruitment season for the first half of the year has begun, more companies are expected to start hiring. Hyundai Motor and Kia Motors started their recruitment earlier this month. Since most of the nation’s major companies are expected to hire fewer people than they did last year, the competition is predicted to be much tougher for applicants.

Under such circumstances, the Ministry of Employment and Labor on Tuesday recognized the 100 companies that contributed the most to creating job opportunities last year.

Awards were given in three categories based on the size of a company’s work force.

Nexen Tire, one of the 35 companies with 1,000-plus employees, was recognized by the ministry for creating more than 1,000 jobs after it built a plant in Changnyeong, South Gyeongsang in 2010.

President Park Geun-hye attended a luncheon with representatives of the 100 honored companies on Wednesday at the Blue House and encouraged them to help the government in its efforts to improve the nation’s labor market structure and provide more jobs for young people and to boost the economy.