The night the coup began and Park got shot at

The night the coup began and Park got shot at 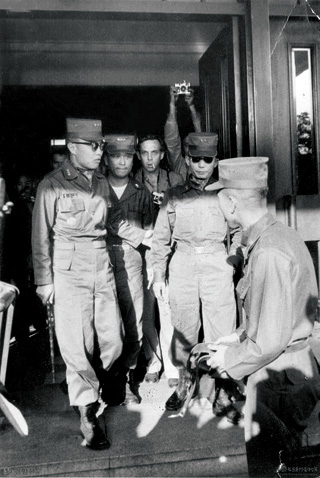 Park Chung Hee, second from right, leaves the Blue House after his meeting with former President Yun Bo-seon on May 20, four days after his successful military coup. At far left is then-Army Chief of Staff Chang Do-young.[JoongAng Photo]

This is the tenth in a series of articles on the life and times of Kim Jong-pil, a two-time prime minister, based on extensive interviews with the 89-year-old. This installment depicts the fateful hours before and after Park Chung Hee set in motion the long-planned May 16 coup, which Kim describes as a revolution. Kim remembers Park raged at Army Chief of Staff Chang Do-young after he gave an order to the military police to engage Park’s coup forces.

At 11:30 p.m. on May 15, 1961, Park Chung Hee and I left his house and headed for the Army’s sixth district headquarters in Seoul, which we planned to use as our command center for a revolution. Park was to give an order for action when we arrived there, setting the revolution in motion.

But as we made our move, a sense of anxiety was between us because we were told our plan had been leaked.

I saw two jeeps from the counterintelligence command following us. Park was tipped off at 8 p.m. that armed military police were trying to besiege our comrades at the sixth district headquarters and arrest them. “Our plan has been leaked,” said Park as we waited at his house. But Park was firm in his decision to go ahead with the revolution as planned. 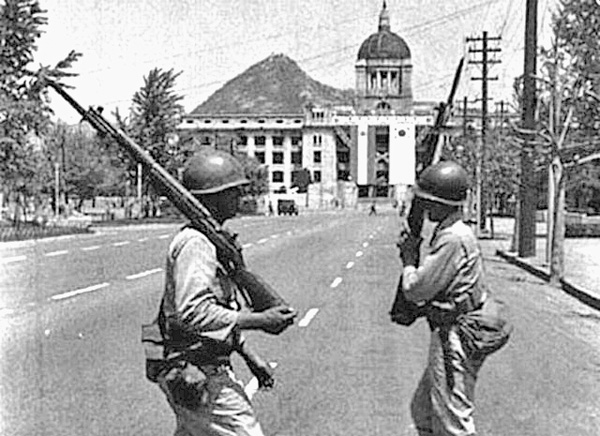 Soldiers dispatched from the 30th reserve division stand guard at the Capital Building after the May 16 military coup. Provided by National Archives of Korea

The source of the leak was the 30th reserve division. There was a power struggle among some of the men taking part in our plan and someone leaked it to then-division commander Lee Sang-guk. Lee reported the information to Army Chief of Staff Chang Do-young, who was aware of our plan to wage a revolution. Once briefed, Chang gave an order to arrest us.

As things were unraveling minute by minute, I was under tremendous pressure to move quickly. My main responsibility was to print copies of the declaration of promises to the nation by the revolutionary forces and take control of the Korean Broadcasting System on Mount Namsan in Seoul so we could air a radio broadcast declaring the success of the revolution.

“We need to move now!” I said to Park as we waited for more information after learning of the leak. Park, with a cigarette in hand, spent about half an hour in silence, thinking about the next move to make. Then he said, “Let’s take action. Even if we die today, history will judge us.”

Some of the people at Park’s house that day recalled that he was a little drunk. But I remember him as being sober and clear-minded with strong determination.

I got out of our vehicle near the now-dismantled Hwashin Department Store in Jongno. “I will see you tomorrow night,” I said to Park as we parted. I rushed to a printing house in Anguk to make copies of the declaration. As I was about to make copies, I told workers at the printing shop that if our plan went awry, they could tell authorities later they had no choice but to help me because I pointed a gun at them.

“But please remain silent until at least 6 a.m.,” I begged them.

As the printing press went into operation, I walked upstairs to keep a watch outside. At around 2 a.m. two policemen approached the shop, curious about the noise so late in the night.

“I have no choice but to shoot you guys if you come inside,” I said to myself. “Don’t come in please.” They leaned on the door trying to hear what was going on inside. Apparently they decided it was a normal rush job and they walked away. I thanked them from the bottom of my heart.

At around 3 a.m., 40 military trucks from the sixth artillery unit in Pocheon, Gyeonggi, made their way to the front of Changgyeong Palace in Jongno District as planned. Watching the vehicles thunder through the center of Seoul, I said to myself, “We did it.” The pressure that had been weighing me down eased a bit.

The fact that those 40 trucks made their entry into Seoul meant they had passed checkpoints guarded by U.S. forces without trouble. Whether we could enter Seoul without engaging the U.S. military was a major factor that night.

During our strategy meetings before May 16, I made absolutely clear that we could never fire at U.S. soldiers no matter what - even if we came under fire from them. “I don’t care if we sustain a loss of lives of our men, never fire back at the Americans,” I told military officers.

Lt. Shin Yoon-chang, who led the artillery unit to Seoul, later told me American soldiers let them pass without any questioning, thinking the vehicles were on the move for an artillery drill exercise. He told me one American soldier even smiled and wished him good luck.

Another pivotal move that would determine our fate that night was the entry of the Marines 1st brigade into Seoul by crossing a Han River bridge. Park Chung Hee met up with then-brigadier Kim Yoon-geun, who was leading 1,500 marines into Seoul. But as the two men met halfway across the bridge, they faced about 50 military police soldiers dispatched by Army Chief of Staff Chang Do-young to block their entry. At the end of the day, Chang turned his back on us and tried to thwart our revolution.

The military police set up a barricade with seven GMC trucks and began firing at Park’s force. But Park’s marines easily outnumbered them and broke through their defense line on the bridge.

With all revolutionary forces now in the capital, a squad was sent to the Bando Hotel where Prime Minister Chang Myon was staying. They were told to arrest him. But Chang fled to Carmel Monastery in Hyehwa-dong 10 minutes before the squad’s arrival at the hotel.

Upset with their failure to take custody of Chang, soldiers fired gunshots in the air at around 4:25 a.m., which I heard.

About 10 minutes after I heard the gunshots, Park Chung Hee arrived at the printing press where I had been through the night. He was very upset with Chang.

“Chang ordered military police to shoot at me after all. I even gave him our blueprint for the revolution asking him to join us. How could he do this to me?” Park was enraged. I asked him what exactly transpired.

“As we were crossing the bridge, military police began firing at us. I got out of the jeep and walked toward them with our forces firing back. Soon afterward, all the military policemen fled.”