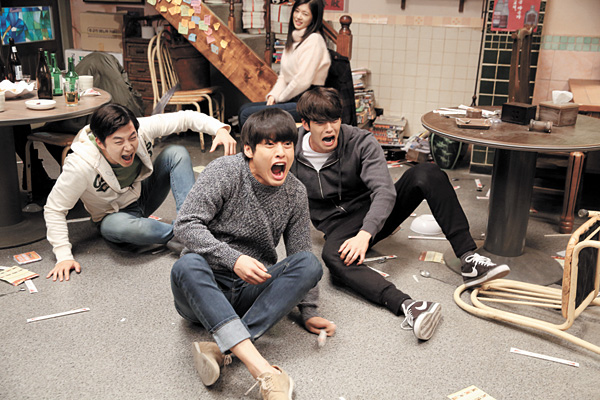 A spate of books, films and dramas these days are focusing on the plight of people in their 20s.

But they are either too sentimental or try to be overly hopeful and courageous, almost to the point that they can feel like a mockery.

While it is true that Korean society demands much of people in their 20s, what they probably need is a good dose of laughter rather than a sentimental message.

And the former is exactly what is served up in Lee Byoung-heon’s debut commercial feature, “Twenty,” which captures the chaotic life moments of a trio of 20-year-old guys in a highly entertaining way.

Some of the most sought-after actors in the Chungmuro film scene - Kim Woo-bin, Lee Jun-ho and Kang Ha-neul - were chosen to play the roles of close high school buddies in the film, which kicks off when the three turn 20 and life starts to become complicated.

Kyung-jae (Kang) is a typical Korean college boy aiming for a job at a big company while indulging in the country’s binge-drinking university culture. He also joins a school club, hoping to get to know a girl he fell in love with at first sight.

On the other hand, Dong-woo, played by Lee from K-pop boy group 2PM, is a good-natured guy who, due to financial problems, has to prolong entering college for a year.

“Twenty” is Lee’s first leading role in a movie.

Then there is lothario Chi-ho (Kim), whose sole interest is women and getting them into bed.

His character is dramatically different from his usual charismatic yet princely roles in drama series such as “The Heirs.”

In “Twenty,” the Hallyu heartthrob plays a pathetic character who, in one telling scene, runs around his house whining that the amount of pocket money he gets is too little.

At a press conference held earlier this month, Kim, 25, said most of that scene was ad-libbed.

Unlike many movies focusing on this demographic, the struggles faced by the characters are not as exaggerated. Instead, the ups and downs they experience are just part of their personalities.

Director Lee doesn’t magnify the fact that Dong-woo has to give up college or that Kyung-jae’s relationship with a girl he has been chasing after for years doesn’t work out.

Instead, the movie focuses on delivering a trivial but comedic slice-of-life mostly driven by sexual desire and binge drinking.

“I didn’t have much trouble writing the script for it, but just took ideas from the awkward moments and trials and errors I and my friends went through when we were in our 20s,” said Lee, who wrote the script and directed the film.

Even for people who have already passed the good - or bad - days of their 20s, the film is bound to bring nostalgia about how reckless and immature they were back in the days.