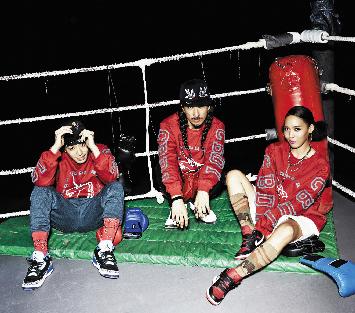 Billboard.com has been introducing many Korean musicians through its K-pop section, but this is the first time for it to reference a Korean act on its official Twitter account, which has about 2.5 million followers.

The U.S.-based music magazine wrote, “Tiger JK, Yoon Mirae and Bizzy transcend Korean hip-hop on MFBTY’s album ‘Wondadand’” with a link to a Billboard.com review of MFBTY’s first full-length album, which was released on March 19.

In the review, the magazine continued, “Wondaland is one of the most universal Korean rap releases in recent mind with tracks, collaborations and flows that can appeal to and impress hip hop fans regardless of language or territory.”

Tiger JK and Yoon, considered two of the country’s first hip-hop musicians, debuted in the late 1990s and tied the knot in 2007.

“Pay Day,” one of Yoon’s songs, was featured in the controversial film “The Interview” late last year without her permission, and Yoon became the center of the media attention.