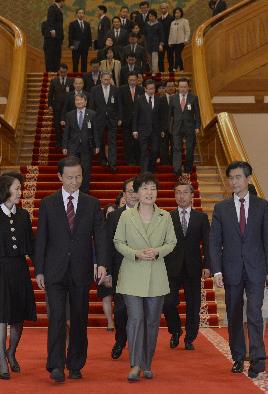 President Park Geun-hye, center, moves to a reception room Friday after handing out credentials to the country’s newest top envoys at the Blue House. Ambassador to China Kim Jang-soo is to the left of Park. [Joint Press Corps]

Kim’s appointment to Beijing comes at a delicate time for Seoul, which plays a careful balancing act between China and the United States, its longstanding ally, which has expressed concerns about the financial institution.

Washington fears China may use the bank for political purposes and attempt to position it as a rival to the World Bank and the U.S.-led Asian Development Bank.

Kim is the first ambassador to China who comes from a high-ranking military background.

The former security adviser was thrust into the domestic spotlight in 2007 after he was observed standing upright while greeting late North Korean leader Kim Jong-il during a visit with other ministers to Pyongyang for the second inter-Korean summit.

His posture contrasted with other people in the delegation, who lowered their heads as a sign of respect, as is customary in Korean culture.

Kim resigned from his Blue House post last May to take responsibility for the sinking of the Sewol ferry on April 16, which left more than 300 people dead.

As the ambassador to China, Korea’s biggest trade partner, Kim is expected to play a delicate role in easing Beijing’s disgruntlement with the installment of the Terminal High Altitude Area Defense (Thaad) system should Seoul decide to deploy it.

On Friday, the government also appointed Mo Chul-min, a former senior presidential secretary for cultural and educational affairs, as the new ambassador to France.