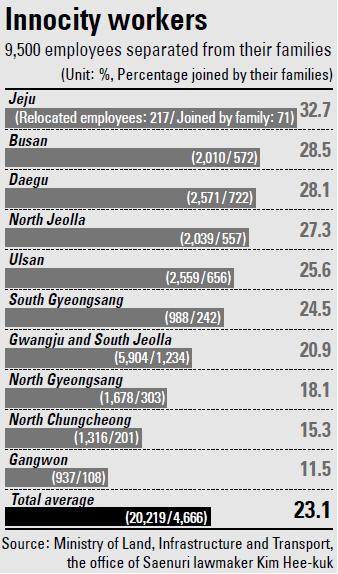 Separated families in Korea used to refer to families divided by the 1950-53 Korean War and the demilitarized zone separating North and South Korea.

But now there’s a new type of separated family in South Korea - clans rent asunder due to public institutions moving out of Seoul.

Mr. Lee, 43, who lives and works in Seoul, hasn’t seen much of his wife for the past couple of months. His wife, Ms. Kim, 43, had to move to Busan with the public financial enterprise she works for two months ago.

The couple’s biggest concern is their 12-year-old son. Kim couldn’t take him with her because there wasn’t a school in the Innovative City District, or Innocity, the term for areas designated by the government for relocating government offices around the country.

But Lee doesn’t usually return home from work until after midnight.

For the recent winter vacation from school, the couple had to send the boy to a three-week English learning camp that cost 3 million won ($2,700), and to Lee’s mother’s home in Gapyeong, Gyeonggi, for the remaining two weeks of vacation. The family reunites only on Saturdays.

“The kid doesn’t usually express his feelings, but he bursts into tears every time his mother leaves,” Lee said. “My wife often asks me whether she should quit her job.”

Similar problems face a 38-year-old mother who had to move to Gwangju & South Jeolla Joint Innovation City when the Korea Electric Power Corporation (Kepco) relocated its headquarters. She says she always feels guilty because she isn’t doing her job as a mom. She managed to attend her 8-year-old daughter’s entrance ceremony by taking a day off from work, but had to miss Parents’ Day events in March.

She has asked her mother, who lives about an hour away by car from her house in Jamsil, southeastern Seoul, to pitch in taking care of the daughter, but she knows that isn’t a solution.

“I’m worried she’ll get left alone at school,” she said. “This is the age when she needs her mom more than ever and I’m seriously considering quitting or taking a leave of absence.”

Starting in 2012, the government promoted a policy to relocate public enterprises to other regions in an effort to disperse jobs concentrated in Seoul and its surrounding area and balance development in the country. Separated families are an unexpected side effect.

According to the office of ruling Saenuri Party lawmaker Kim Hee-kuk, a total of 20,219 employees from 67 public institutions have moved to 10 Innocities around the country from December 2012 to last December. That is less than half the number the government is planning to relocate by next year, which is 47,000 people from 154 public institutions.

Most of employees choose to move alone, leaving families behind in Seoul.

According to the office in charge of promoting relocations under the Ministry of Land, Infrastructure and Transport, only 4,666 or 23.1 percent of the 20,219 relocated people took their families with them and the rest, including 5,052 single people, chose to live away from their families.

The ratio of those who moved their families with them was higher in large cities such as Busan (28.5 percent) and Daegu (28.1 percent), but it stayed at 11.5 percent in Gangwon and 18.1 percent in South Gyeongsang.

In the case of Kepco’s relocation to the joint innovative city, which was one of the biggest migrations in the project, only 268 people or 17.5 percent of the total of 1,531 employees moved with their relatives. Employees who are living apart from their families are currently number 832, and 431 of the employees are single.

The Korea Workers’ Compensation and Welfare Service, which moved to Ulsan, had only 40 out of 432 employees take their families with them (9.3 percent); the Korea Transportation Safety Authority had 212 out of 902 (23.5 percent); and the Small and Medium Business Corporation had 50 out of 312 (16.6 percent).

The administration office for the relocation project remains optimistic.

“We expect more people would move with their families as time goes by,” said an official of the office.

But others are skeptical, especially for double-income couples.

“I can’t force my wife to quit a job that she had for the last 15 years,” said a 45-year-old employee of Korea National Oil Corporation, which moved to Ulsan. “It is impossible to support the family without her earnings because we have to pay for housing and school expenses of our children.”

Ms. Kim, 35, and her husband are working for the same public institution, which recently moved to Gimcheon, North Gyeongsang. Kim, who just came back from maternity leave, was sent to a branch in Seoul, but her husband had to move down to Gimcheon.

“We are spending most of our earnings on my mother and nannies taking care of the baby, and I think we won’t be able to stand the situation if the baby gets seriously ill or something,” Kim says. “I don’t understand the policy because it only tears families apart.”

Another concern is the travel back and forth to see their families.

Critics say the policy should have been more realistic. “Relocation to Innocities does not mean just changing the addresses of public institutions,” says lawmaker Kim Hee-kuk. “The living environment around those facilities also counts. Most important is to let people settle down there.”