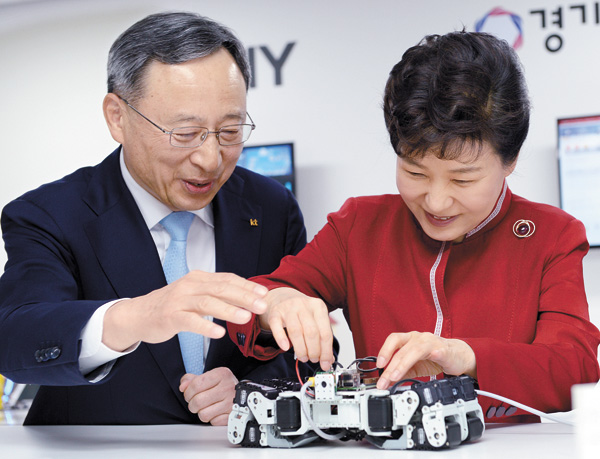 KT Chairman Hwang Chang-gyu, left, and President Park Geun-hye have fun with a robotic spider on Monday at the newly opened Center for Creative Economy and Innovation in Pangyo, Gyeonggi. [NEWSIS]

The nation’s eighth Center for Creative Economy and Innovation opened its doors on Monday in Pangyo, Gyeonggi, the nation’s emerging tech hub that is often compared to Silicon Valley in California.

The center, led by KT, the second-largest mobile carrier, will serve as an incubator for game development, financial technology (known as fintech) and the Internet of Things (IoT), and help start-ups and small and medium-size companies advance abroad.

The center spans 1,620 square meters (16.2 acres) across two stories. The company has also earmarked 105 billion won ($95 million) in funds to be wholly devoted to fostering start-ups.

“Pangyo will become the base camp for Korea’s small and medium-sized start-ups to enter the global market, and the Gyeonggi Creative Economy Innovation Center will be guiding start-ups as a trustworthy Sherpa for them to pioneer overseas markets,” President Park Geun-hye said at the opening ceremony.

Under the government’s plans, the Gyeonggi center will be part of a database of corporate information at 17 existing and soon-to-be-established creative economic innovation centers countrywide, while each company will be matched with overseas investors.

Forty-eight percent of all the IT companies of Korea are located in Gyeonggi, and Pangyo has recently risen as a haven for start-ups and game developers.

The president noted that Korea could leap to become one of the world’s top IT powerhouses thanks to an open-knowledge ecosystem that facilitates free communication among young talents.

She also expressed hope that the Gyeonggi center would serve as a catalyst for the spread of quality technology and help Korean companies spearhead the global market.

In tandem with the opening of the center, the Ministry of Land, Infrastructure and Transport on Monday announced that it would designate the entire Pangyo valley as an inner-city industrial complex by end of this year on a budget of 1.5 trillion won. The new complex aims to attract 1,500 IT companies and hire more than 100,000 employees.

After the detailed plan was first announced in mid-January, more than 10 companies showed an interest in entering the industrial complex, which resulted in the government deciding to expedite the new complex’s launch by six months.

The Land Ministry will immediately begin freeing up legally protected land for development, and put areas from the former Korea Expressway Corporation headquarters - located inside Pangyo Techno Valley - up for open bidding to private companies by the first half of 2016.

Land and offices will first be distributed to businesses in the IT, gaming and service sectors, as well as other cultural content producers.

The Land Ministry and the Gyeonggi Provincial Government will jointly hold investment consulting sessions for companies hoping to enter the complex in the latter half of this year.

The complex will offer select small technology companies a discount of up to 30 percent toward land and office lease fees, while providing office space and land for free to new IT start-ups. Those companies will be granted partial tax reductions when it comes to acquisition taxes, registration taxes and property taxes.