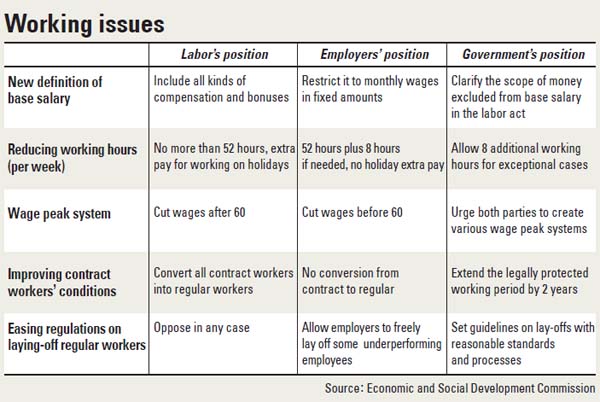 Negotiations on major labor reforms dragged on into Tuesday night as representatives of the unions, business and the government struggled to reach agreement.

Despite marathon talks that started Monday and were supposed to conclude Tuesday, representatives of the Federation of Korean Trade Unions, the Korea Employers Federation and the deputy minister of Employment and Labor failed to reach a consensus as of 8 p.m. on Tuesday over ways to reform Korea’s labor market - reforms that are expected to have a major impact on the Korean economy.

No new deadline was announced.

The Federation of Korean Trade Unions is one of the country’s two largest labor unions’ associations, and the Korea Employers Federation is the largest association of employers. Also attending was a representative of the public interest and four labor specialists from the private sector.

The reforms are expected to have repercussions on the country’s sagging job market and the high youth unemployment rate.

After unsuccessful negotiations in the morning, representatives from the labor unions held their own closed-door meeting at 2 p.m. to gather internal opinions on the issues causing the deadlock.

“As far as we know, there was an internal dispute among the labor unions over the negotiations,” an official from the Economic and Social Development Commission, a presidential committee in charge of arbitration, said by phone. “Some hardline members are reportedly protesting the government’s proposals or management’s positions.”

The issues on the table are divided into two main parts. The first is three ways to improve working conditions for regular workers, which refers to employees with salaried jobs and benefits.

The second main issue is how to improve the so-called duality of Korea’s labor market: companies’ reliance on both regular and irregular workers, which refers to contract employees with no benefits and little job security.

The most contentious reforms were the ones designed to reduce the economy’s reliance on irregular workers.

The unions are calling for companies to put on staff all contract workers that work for two years, as per current law. Currently, companies fire contract workers before they reach the two-year limit so they don’t have to hire them.

Employers are asking for the two-year term for contract workers to be extended to four years.

Easing regulations on how companies treat salaried workers was also discussed as a way of “increasing flexibility in the labor market.” The companies want greater freedom to lay off salaried workers for poor performances, which was strongly opposed by the unions.

Both sides basically agreed to three reforms for regular workers, which are revising the definition of a worker’s base salary, reducing working hours, and extending the retirement age with the addition of a “peak” salary system. In that system, workers would be employed longer, but their salary would peak and then start to shrink for their final years on the job.

But they sparred over details of those three reforms. On base salaries, which are the standard for companies to calculate all kinds of compensation including severance, the unions called for including all kinds of bonuses and benefits in the definition.

The companies maintained their position on keeping the current definition of base salary, which is monthly pay without the benefits.

On the matter of the retirement age, both parties agreed on adopting so-called peak wage system, but they disagreed on when the worker’s salary should start to shrink.

In terms of reducing working hours, both sides agreed to reduce the legal working hours to 52 hours from 68 per week, but management demanded allowing 8 hours more if necessary.

When the talks deadlocked, President Park Geun-hye called upon the parties to reach a consensus within the deadline they promised, which was the end of March.

“It could be the last opportunity to improve the quality of our labor market for the future generation,” she said at a cabinet meeting on Tuesday. “This was our promise to the public.”