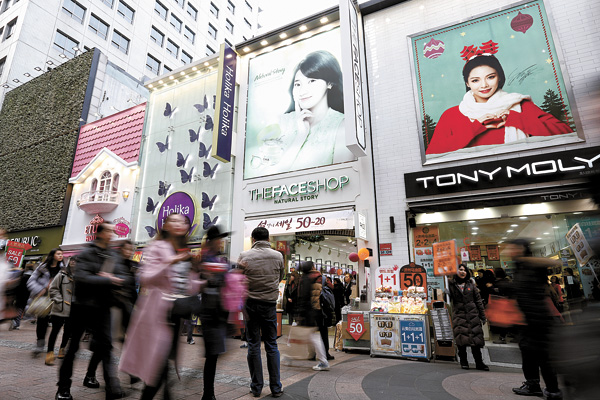 Stores around Myeong-dong, downtown Seoul, attract large crowds of tourist particularly from China and Japan, making it the retail district that commands the highest rents in the country. [BLOOMBERG]

Investors are on the prowl for retail properties in solid shopping neighborhoods after the key interest rate sunk to a record low of 1.75 percent.

Retail properties in neighborhoods with large numbers of visitors are preferred because they offer high rental incomes and are an easy investment to flip in the future. Demand is steady.

But last year rents for retail spaces didn’t rise as much as many landlords wished. In the category of stores owned by groups of individual investors, the rent only inched up 0.1 percent. For those in buildings owned by a corporate body or by one or two wealthy individuals, the rent rate grew 1.2 percent. The industry separates properties in those two groups.

Last year the shopping neighborhood with the most expensive rent in the country remained Myeong-dong in downtown Seoul, according to an analysis made by the Korea Appraisal Board from data from the fourth quarter of last year. This neighborhood, now crowded with Chinese tourists following in the footsteps of Japanese, commands an average of 897,000 won for every 3.3 square meters or one pyeong, the Korean measuring unit. That’s a 2.5 percent increase over 2013. 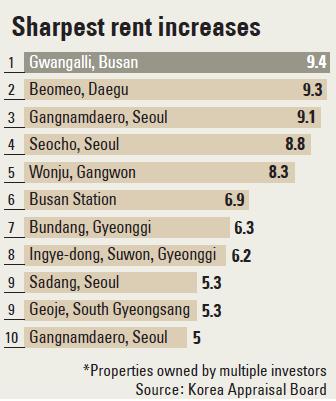 The commercial area around Seoul Station in downtown Seoul came in second pricewise, commanding 539,000 won per 3.3 square-meters. Seoul’s most renowned neighborhood thanks to the K-pop sensation Psy, Gangnam District, trailed behind at 446,000 won, and fashion mecca Dongdaemun took the fourth spot at 317,000 won. Jongno District, the heart of Seoul’s traditional downtown, took fifth place with 300,000 won.

The top 10 neighborhoods with the most expensive retail rents were all located within Seoul. Other than the Cheonan bus terminal area in South Chungcheong and Jung District market in Busan, which took the 19th and 20th spots, the top 20 most expensive retail districts across the country were also all in Seoul. This means that neighborhoods with steady crowds and thriving retail businesses are concentrated in Seoul.

But just because rents are high doesn’t guarantee the highest rate of return on investment.

The No.1 most expensive neighborhood, Myeong-dong, ranked sixth when it came to profit on investment, which was 9 percent.

Seoul Station was even worse ranked at 66th. Gangnam was a disastrous 134th when it comes to return rate.

Seongnam and Okgyo commercial district in Ulsan took the top spot with a profit rate of 10.3 percent. The neighborhood’s rent was only 58,000 won for every 3.3 square meters.

The commercial district that saw the sharpest increase in store rents was Gwangalli in Busan. Store rents along the popular beach in the southern city increased 9.4 percent in the fourth quarter compared with the same period in 2013.

The Korea Appraisal Board studied 276 commercial properties. Individual investors owned 106 while the other 170 were owned by owned by a corporate body or by one or two wealthy individuals.

On average, the rent in stores in buildings that are owned by a single entity was 105,000 won per 3.3 square meters. This was slightly higher than the 95,000 won in buildings owned by multiple owners.

The appraisal board plans on creating a national statistics database by studying the rent and investment return rate every quarter.