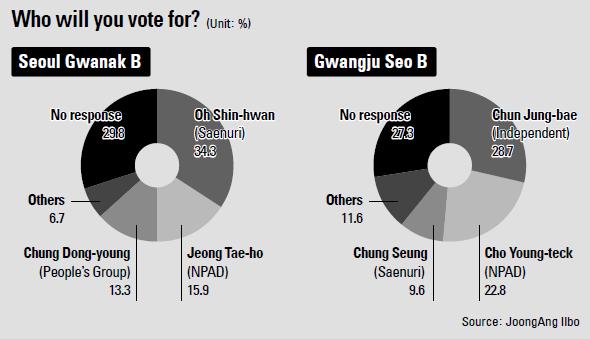 The main opposition party is struggling in key districts in the lead-up to the by-elections as it faces strong opposition from independent candidates who were once party members, the latest poll shows.

Four vacancies in the National Assembly are set to be filled in the April 29 by-elections. Three seats were previously occupied by the now-disbanded Unified Progressive Party (UPP) and one by the conservative ruling Saenuri Party.

Despite expectations that liberals have the upper hand, the main opposition New Politics Alliance for Democracy (NPAD) is struggling in key districts, a survey conducted by the JoongAng Ilbo showed on Thursday.

The poll was conducted Tuesday to Wednesday in Seoul’s Gwanak B District and Gwangju’s Seo B District. Six-hundred voters were surveyed in each district.

The poll had a 95-percent confidence level with a margin of error of plus or minus 4 percentage points.

The Saenuri Party’s Oh Shin-hwan had the most support with 34.3 percent in Seoul’s Gwanak B, according to the survey.

NPAD candidate Jeong Tae-ho came in second with 15.9 percent, while Chung Dong-young, a former presidential candidate in 2007 who recently left the NPAD to create his own party, recorded 13.3 percent. Lee Sang-kyu, an independent candidate who used to represent the district as a UPP member, was favored by 2 percent of voters in Gwanak B.

The district is considered a liberal stronghold, with the majority of its residents being students and members of the working-class population.

Many residents also hail from North and South Jeolla, the home base of the opposition party.

Nevertheless, asked which political party they support, 41.6 percent of Gwanak B voters said they support the Saenuri Party, while only 25.2 percent backed the NPAD.

In Gwangju Seo B District, the NPAD was also struggling.

Political insiders speculate that the NPAD’s struggle is due largely to an inability by opposition Chairman Moon Jae-in to engage the party’s older stakeholders, many of whom actively supported late President Kim Dae-jung.

Loyalists to the late Kim are still widely influential in North and South Jeolla.