Choi Woong-pil, 44, a managing director at KB Asset Management and one of the top fund managers in the local market, feels uneasy whenever stocks rally.

Choi is apprehensive because of the short-term investment perspectives that characterize, and hinder, the Korean fund market. While long-term fund investments are considered natural in the United States and other advanced markets, Korean investors are focused on daily yields, hastily recuperating their money in equity-linked funds when stocks are up and leading to volatility in the market. In February 2014, the total investment in Choi’s own fund reached 2.56 trillion won ($2.4 billion). But as much as 900 billion won was resold last year because stocks, and the fund’s yield, rose.

A private banker at a commercial bank, surnamed Lee, has his own blacklist of funds. Private bankers like Lee tend to avoid funds whose manager has changed more than five times over a three-year period, or those that are operated without a clear vision.

One of his clients, surnamed Yoon, sought his advice about a fund in which he’d invested to prepare for his retirement. Lee advised Yoon to resell the fund, which had been on Lee’s blacklist after its original manager left two years ago and has been losing money since.

In an aging society, fund investments are considered one way to prepare for post-retirement life. But the short-term investment practices many Koreans favor are risky, and not often helpful.

It is common for Korean investors to recuperate their investments in long-term funds in less than two years, when they believe the funds have hit their peak yields. 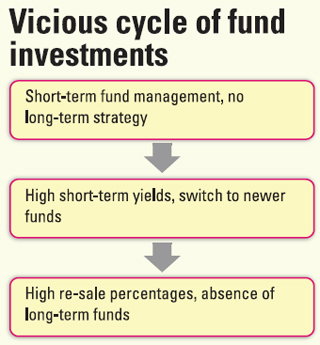 Sellers of fund products at securities firms and banks also encourage their clients to offload early.

Asset management firms usually copy star funds in order to attract more clients, which leads investors to switch from one to another when funds have enjoyed certain levels of yields.

The average length of fund investments by Koreans was less than three years, according to a JPMorgan Asset Management survey of 1,000 fund investors in January. About 43 percent of the respondents said they held their investments for three years at the longest. Only 5 percent reported 10 years.

The Korea Financial Investment Association (Kofia) analyzed the money coming into and out of equity-linked funds in Korea and the United States from 2006 to 2014.

The result showed volatility in the Korean fund market, stemming from frequent inflows and outflows of funds, was 16 times greater than in the U.S. market. The average percentage of investors who resold their funds stood at 4 percent per month, double that of the United States, the analysis found.

Korean retail investors are impatient about making investments because of the so-called memory of loss in 2008. At the time, there was a fund craze in which as much as 227 trillion won was poured into public offering funds. But in the wake of the U.S.-triggered subprime mortgage crisis, many of those funds’ yields plummeted, incurring losses to retail investors. Many investors lost 80 to 90 percent of their principal. Fund sellers also recommended those investors with losses switch to other funds, because they can earn commissions from leading investors to new products.

It is also difficult in Korea to find asset management companies that have distinctive investment philosophies. Fund managers who are famed for high yields often move from one firm to another in pursuit of higher salaries.

As of March, the number of fund managers registered with Kofia is 586 from 53 firms. They are operating 222 trillion won in total.

The survey showed no single asset management firm that had managers who stayed longer than 10 years.

Such short-term oriented fund market doesn’t help the Korean stock market rally in the long run. Whenever stocks are up, funds are resold, and asset management firms should also sell their own stocks in order to return money to their investors. Overall, such short-term investment practices are being an obstacle to the growth of the entire stock market. The Korean stock markets rallied recently, thanks to loosened monetary policies by major countries. But between March 16 and 26, about 1.1 trillion won was withdrawn from local equity-linked funds.

“Unlike Korean investors, American investors do not immediately pull out their money even though stocks rise,” said Yim Byeong-ik, a director at Kofia. “When stocks are down, they instead put more into funds.”

For fund investments, experts advise that investors would do better with long-term perspectives rather than obsessing about short-term yields.

“They need to keep observing their funds’ yields over a long period of time,” said Cho Jae-young, a private banker at NH Investment & Securities. “Instead of subscribing to a fund that is operated by a star fund manager, try to find funds that produce stable yields on a yearly basis.”