Getting behind the wheel of a Mercedes-AMG GT-S

Getting behind the wheel of a Mercedes-AMG GT-S 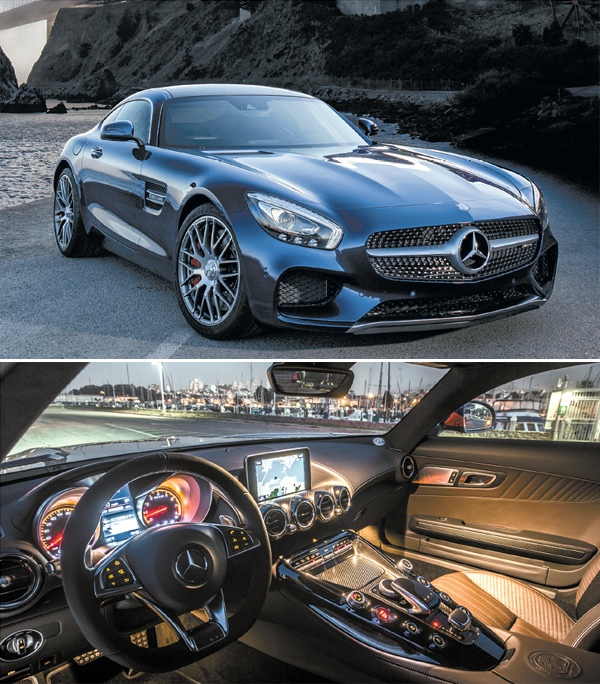 The exterior and interior of the Mercedes-Benz AMG GT. Provided by the company

High-performance car brand Mercedes-AMG is part of Daimler Group, formed after two engineers fell in love with motor sports and left Mercedes-Benz to begin a business specializing in car tuning. AMG combines the co-founders’ last names (Aufrecht and Melcher) and the company’s region of origin (Großaspach).

As the years passed, AMG gained fame in the motorsports and car tuning businesses, and after the Daimler Group’s acquisition of portions in AMG’s stake in 1999, the company became Mercedes-AMG in 2005, a union that recently produced the Mercedes AMG GT, successor to the SLS AMG first produced in 2010. With the AMG GT, Mercedes-AMG looks to compete with the Porsche 911 series.

Mercedes-AMG offered the newcomer for a test drive on two routes in California. One route began at a San Francisco hotel and followed the coast to Monterrey, while the other was the Laguna Seca Track, dubbed the “corkscrew.” Built in 1957, the Laguna Seca Track lives up to its nickname. The 3.6-kilometer (2.2-mile) route includes 11 sharp curves.

“This car is all about proportion,” said Mercedes-AMG Exterior Design Director Robert Lesnik.

With a stretched front and an condensed rear, Lesnik said the inspiration for the GT came from the company’s early 20th century racecar nicknamed the “Silver Arrow.” In contrast to the masculine front exterior, the low interior paints a different picture, giving the driver a feeling of being surrounded by a huge wall.

The same is true for the GT, as the 4.0-liter V8 twin-turbo engine adds another dimension to the 462-horsepower car.

But while Mercedes-AMG planned to put the GT on two routes, I only got to take this bad boy for a spin on the Laguna Seca Track, which was still quite an experience.

The test drive began in the afternoon after a short briefing about the car. An instructor told drivers to follow at the instructor’s pace, and allowed no one to pass. When the reporter heard about the rule first, it kind of relieved me, but it wasn’t even possible to see the tail of the pace car because the instructor was Bernd Schneider, 51, who won five championships in the Touring Car Masters in Germany.

With a press of the start button, the engine roars like a beast chasing down prey, yet faithfully waiting like a loyal hunting dog to do its master’s bidding. At full acceleration, the 510-horsepower GT-S reached 100 kilometers per hour (62 miles per hour) in 3.8 seconds, nowhere near its maximum speed of 310 kilometers per hour.

As the GT-S accelerated, the engine was undoubtedly impressive - frighteningly impressive when the engine screams past 3,000 rpm and overwhelms the body with adrenaline. In contrast to the beastly engine, the comfortable interior and bucket seats allow the driver to adapt to any scenario.

While it didn’t take long to show my true driving skills, the GT-S’s smart driving system kept me safe, but this bad boy was much more sensitive.

There were no smoke or mirrors during the test drive, as the GT-S Edition 1 lived up to its billing. As the car’s suspension responds perfectly to the driver, the distance between driver and instructor got larger with every mistake the reporter made. However, the electronic stability program gave a warning whenever the reporter drove the car off the course.

The GT is a textbook design, with 47 percent of the car’s weight in the front. About 93 percent of the weight is aluminum as the frame is composed of aluminum alloy. But the trunk lid is made olf cast iron and the front of the body from magnesium. The total weight of the car’s body is 231 kilograms (509 pounds) and reflects Mercedes-AMG’s efforts to keep the car light with its 209-kilogram engine. Mercedes-AMG’s efforts can even be seen in its carbon shaft.

With regard to the balance when driving, the GT placed a lot of pressure on the tires and consequently required careful driving skills. In stark contrast to the Porsche 911, which makes drivers overestimate their skills with its electronic driving assistance systems, the GT shatters such arrogant delusions.