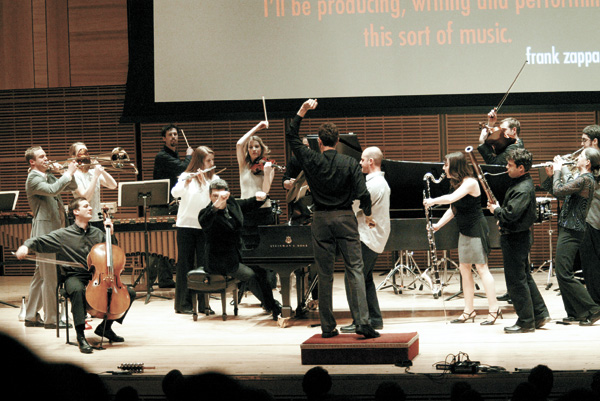 American contemporary music ensemble Alarm Will Sound is included in the lineup for the upcoming Right Now Music 2015 marathon festival on April 11 and 12 at Culture Station Seoul 284 in central Seoul. Provided by the organizer

It can be hard to sit still for over 17 hours, even if there’s live music to enjoy.

Fortunately, at “Right Now Music 2015” - an upcoming two-day concert, lasting more than 17 hours in total and featuring a mix of avant-garde, classical, modern rock and even traditional Korean music - attendees don’t have to.

Visitors can move around or even stretch out on the ground as they listen to the music. Even one of the participating classical ensembles will perform lying down, with a cellist and oboist playing from the floor.

This “marathon showcase of non-stop modern music will be something very unfamiliar in Korea,” says Kim In-hyun, CEO of the event’s organizer, Ear To Mind.

“There are many opportunities to enjoy concerts in America and Europe by experimental groups,” said Kim. “But since it’s the first time in Korea, it was very difficult to put this all together. Contemporary music in Korea is still lagging behind.”

Last year, Ear To Mind introduced New York-based contemporary classical group Bang On a Can, a 27-year-old group famed for their marathon-length concerts, to Korea.

“Bang on a Can supports young artists and provides them footing and exposure [through their concerts]. The objective of this show is similar. I want people to take a look at what contemporary musicians are making, and thinking about, right now.”

As Kim has experienced contemporary music in both Europe and in New York, she noticed that the two regions have different musical styles.

“How current musicians express themselves is very different, so I wanted to showcase all of them,” said Kim.

American contemporary music group Alarm Will Sound, known as the most experimental yet popular 20-member chamber ensemble, as well as Berlin’s “Ensemble U3,” Slovenian guitarist Mak Grgic and local acts like Jung Marie, duo su:m and Geomungo Factory will all perform.

Some artists, like Jung, seem at first to challenge the notion of contemporary. Jung specializes in jeongga, or traditional Korean songs based on Korean poems. She always appears wearing a traditional Korean dress and appears as if she only performs in traditional shows. But she has been interpreting jeongga through Gregorian chanting, creating a new, hybrid style of music.

“People will be confused,” Jung said. “But I first encountered contemporary music in the 1990s as a student majoring in gugak [traditional Korean music]. It was a shock for me. I began to pay attention and study it.”

Just as contemporary music surprised and informed Jung, she hopes that her music will do the same to others.

“I want people to know that contemporary music is not how we present it or what kind of technology we use to deliver it,” said Jung.

“It’s how the listeners embrace contemporary music, right at that very moment.”

Kim hopes to make the festival an annual event.

“It may take time, but I hope to create a platform where current musicians can show the public what kind of music they make, and where the public can enjoy themselves,” Kim said.

On the first night, Belgian DJ Julian Quintart, who has gained huge popularity from JTBC’s “Non-Summit,” will unveil a performance differing from his usual electronic sets, according to the organizers.

The concert starts at noon each day and ends at 11 p.m. on Saturday and at 6:30 p.m. on Sunday. A one-time pass, which doesn’t allow the ticket holder to come back to the venue after leaving, costs 12,000 won ($11). Day passes allowing the ticket holder to enter and exit the venue freely cost 30,000 won. VIP tickets, which offer the same benefits as the day pass but include a donation to the festival, cost 100,000 won.