For nearly a year, German automaker Volkswagen has offered an incentive averaging $2,800 as the weaker euro against the dollar allows some space for price cuts and aggressive marketing.

Such tactics have forced Hyundai Motor to adopt a similar move, even though the won hasn’t weakened as much as the euro against the greenback.

The steep devaluation of the euro is having a major impact on Korean goods sold abroad.

But its influence isn’t limited to overseas. Even in the local market, it has helped increase imports of European goods, adding to the trade deficit between Europe and Korea. 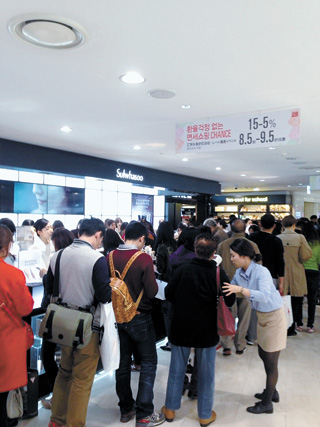 Customers wait in line Sunday at Lotte Duty Free in Myeong-dong, downtown Seoul, for discounts of 5 to 15 percent. Provided by the company

At the meeting, one head, who wished to remain anonymous, raised concerns over Korean companies that compete with companies from Germany, France and Italy. The researcher said there already are reports that Korean companies will face major risks if the devaluation of the euro continues for two to three years.

The weak euro also is reducing payments received by Korean exporters that shipping products to Europe.

A plastic goods exporter ships $3 million in products to Germany and Italy each year and receives 80 percent of its payments in euros. The company unsuccessfully asked the European buyers to pay more per unit.

They refused, saying their costs would go up at a time when the European economy continues to struggle, said the company official.

According to the research center under Korea International Trade Association (KITA), the won was 1,362 against the euro in the third quarter of 2014. But as the euro continues to weaken, it was 1,239 won as of the first quarter.

That’s a 9 percent devaluation of the euro against the won since September.

The impact is even felt on the domestic market. The most visible sector affected by the euro’s decline is the luxury business.

French luxury brand Chanel last month created a sensation when it sold its high-end handbags at discounted prices, something the luxury brand is notorious for never doing.

Chanel’s midsize Classic bag, which retails for 6.43 million won ($5,867) was sold at 5.38 million won. And it wasn’t only Chanel bags that benefited from the weaker euro. Luxury Swiss watch manufacturer Tag Heuer saw prices fall as much as 27 percent. One of the company’s 7.7 million won watches was selling for 5.6 million won.

The Korean office of the wristwatch company said headquarters adjusted prices to reflect the weaker euro.

Local duty free stores under major retailers, including Lotte and Shilla, were offering discounts of as much as 15 percent on European goods ranging from clothes to fashion accessories to watches.

“We’re carefully monitoring the price flow of European companies and reviewing whether we need to come up with a countermeasure,” said an official with a local fashion brand company.

With European products imported to Korea seeing their prices decrease and shipments increase, the trade deficit with Europe has widened. Last year, the deficit expanded to $10.7 billion from $7.4 billion the previous year.

“A countermeasure is urgent, particularly for small and midsize Korean companies that are being affected by the currency exchange rate,” said Lee Hang-koo, senior researcher at Korea Institute for Industrial Economics and Trade.