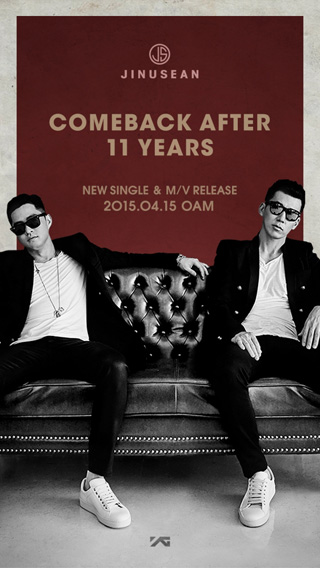 Jinusean, one of Korea’s original hip-hop duos, is making their comeback with a new mini-album at midnight on April 15, 11 years after their last, “Phone Number,” was unveiled.

According to multiple music industry insiders, the duo’s new songs will be rhythmic with cheerful melodies.

Since their debut in 1997, Jinu and Sean, the members of the duo, have released many hit songs such as “Tell Me,” “A-YO” and “Phone Number,” which were hugely loved by the public before the mid-2000s.

In addition to their new album, Jinu and Sean will hold a performance with other top singers from the 1990s at the Totozel Super Concert, which will be held in Seoul World Cup Stadium in Mapo District, western Seoul, on April 25.

Sean, who’s been away from the music industry for a while, has been working for charities during his absence. He is proceeding with a fund-raising campaign called “Good Action by Sean” with Happy Bean, run by the country’s largest web portal, Naver.

The campaign started last May 28. Its accumulated amount of donations came to more than 2 billion won ($182,800) as of Tuesday.

The money collected from the campaign will be donated to Purme Foundation, a nonprofit organization that supports people with disabilities by building rehabilitation facilities.