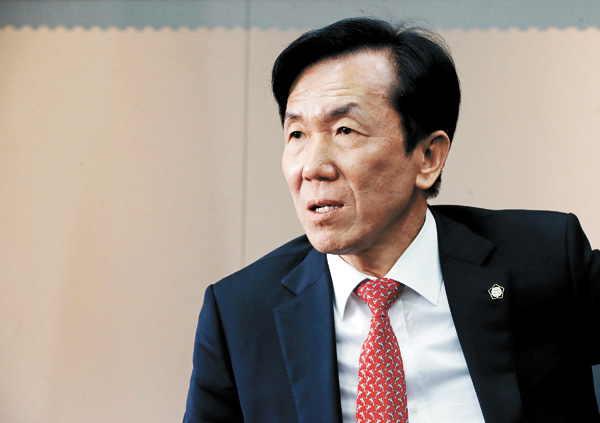 
Ha Chang-woo, chairman of the Korean Bar Association, has consistently said the country needs serious judicial reform, starting with a system that doesn’t allow former chief justices of the Supreme Court to practice as lawyers. It is considered a surprising comment as the association is one of the three most important organizations in legal circles, along with the prosecution and judiciary.

Ha became the chairman of the association on his third attempt for the post and raised questions about former high-ranking legal officials from the court and prosecution getting hired by high-powered law firms. He personally asked Cha Han-sung, former chief justice of the Supreme Court, not to accept an offer from a law firm. Ha said it would amount to corruption because former chief justices like Cha could exercise inappropriate influence in court. Critics says Ha’s position violates a person’s right to choose a job.

The JoongAng Ilbo sat down with the 61-year-old at his office in Yeoksam-dong, southern Seoul, to hear why he is focusing on judicial reform.

Q. Why do you insist serious judicial reform is needed and how would you begin?

A. I passed the bar exam after I finished military duty. After graduating from the Judicial Research & Training Institute in 1986, I started my career as a retained attorney. People thought I had a decent job, but the reality was far from it since not so many people begin working as a lawyer immediately after finishing the training institute, meaning I saw some discrimination. Some judges even mocked me, asking how I could work as a lawyer with no experience as a prosecutor or judge. Since I started my career at the very bottom, I was able to see problems with the prosecution and court, hearing judges say bad things to lawyers like me. I thought that could not be a fair justice system.

I started working at the bar association in 1997 and became chief of the Seoul Bar Association in 2007. At that time, one senior judge in the Seoul Western District Court unreasonably treated a lawyer who didn’t have any experience as a prosecutor or judge and made an unfair ruling. That was the origin of a system of evaluating judges that started in October 2008. I requested a meeting to submit my evaluation report to the court’s administration office chief, but was rejected, making me submit that report to the Supreme Court’s civil service office instead. A bill to use the evaluation report as a reference concerning judges’ personnel matters was proposed later. That was how I decided to contribute to the nation’s judicial reform.

There is criticism that your work on judicial reform violates laws.

It takes too much time to establish laws that prevent legal officials from getting benefits [getting hired by a law firm for a big salary] after retirement. People should know that people from the legal circle are smart enough to avoid any kind of regulation that would disadvantage them. To stop that, we first need to block the exit. Korea is the only country where former legal officials open up their own law office after retirement. It is time to change such a bad tradition. Before we judge that a law to prevent such things is right or wrong, there should be people who can bring this issue to the public and try to block such attempts by retired legal officials. We asked Park Sang-ok, a candidate for chief justice of the Supreme Court, to vow not to become a lawyer after he retired from the post, so let’s wait and see what happens.

Some say it violates a person’s right to choose a job.

It doesn’t matter. They can’t receive benefits because they worked as a high-ranking legal official. It’s more important to develop a fair judicial system than secure people’s freedom to choose a job. We can’t reform the judicial system if we don’t use such an aggressive method.

Other than the chief justice, there are many people with benefits like judges who work in the Constitutional Court, justice ministers and the prosecution chief.

We will try to find out how they make money as lawyers and how we should react to it. But we currently think the chief justice is the core of this issue. We will try to develop a standard first for this matter and add details later.

Why do you think chief-justices-turned-lawyers are favored by big law firms and their influence is big in court?

A total of 36,000 cases are managed by the Supreme Court and each chief justice rules on 3,000 cases per year. Because of that the value of a chief justice is so high and lets them earn so much money even after the retirement. It isn’t hard for them to maintain their relationship with judges who were subordinates and coworkers in the court. This is very wrong.

How many chief justices we should have?

I say more than 50. If it is too many, we can increase it to 36, excluding two judges who manage administrative work, from the current 12. Chief justices should give up their vested rights to make rulings right and fairly. About 60 to 70 percent of cases are dropped without going to trial every year.

Shouldn’t there be some legal solutions for this?

If we want to stop retired chief justices from becoming lawyers, we need a system that compensates them. For instance, we can provide a pension for them or give them an opportunity to become a professor at law schools. They also can work at other legal organizations, including Korea Legal Aid Corporation. We will soon propose a bill for the measures to the National Assembly.

Even if such methods are legalized, the Constitutional Court might rule them unconstitutional.

Some chief justices who retire might file a constitutional appeal, but there are some positive signs like the recent adultery ruling by the Constitutional Court. It means society is changing. The most important task for our society is to secure fairness. Society should be fair and equal opportunities must be given to anybody and I think such benefits that former chief justice have been getting after the retirement aren’t fair. There are lawyers working all night long for just 2 million won ($1,838) to 3 million won a month, but those lawyers receive more than 30 million won per month without studying a case, just by giving his or her signature on a paper made by subordinate lawyers to make it look like the case is handled by the former chief justice. Where do you think the money came from? To hire such famed judges-turned-lawyers, people sometimes borrow money from banks and such money only enriches the greedy lawyers. There are people who still say it can be fixed if we establish laws, but it takes too much time.

How do you evaluate the Justice Department led by Chief Justice of the Supreme Court Yang Seung-tae?