Gov’t to press on with labor reforms

Gov’t to press on with labor reforms 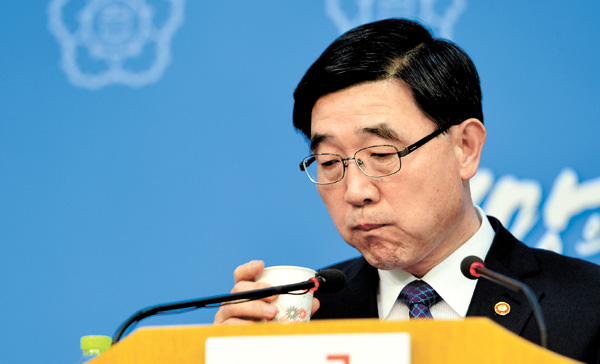 Employment and Labor Minister Lee Ki-kwon quenches his thirst after announcing the government’s position on the failed labor reform negotiations at a government building in Jongno, central Seoul, on Thursday. [NEWSIS]

Expressing regret for the failed negotiation on structural reforms for Korea’s labor market, Employment and Labor Minister Lee Ki-kwon said the government will execute policies on some issues agreed to by both companies and labor, such as not raising salaries too much for high-wage employees and expanding jobs for young jobless people.

Negotiators from the Federation of Korean Trade Unions (FKTU), one of the largest labor union associations, walked away from the talks with the government and representatives of corporations on Wednesday. The negotiations were launched last September after President Park Geun-hye asked the three sides to discuss ways to reform outmoded labor regulations.

“Considering the desperate realities, such as high youth unemployment and an unstable job market for middle-aged people, we should not postpone labor reform,” Lee said at a briefing Thursday. “The government will first take some measures on issues agreed upon by employers, labor and the government.”

The minister said progress was made on many issues but not on two contentious ones. The first was revising the employment law to make it easier for employers to fire underperforming workers, which unions wouldn’t accept.

The other fundamental disagreement was on the proposed “peak wage system.” The system would allow companies to extend the retirement age by starting to cut older workers’ salaries in their final years. The legally guaranteed retirement age will be raised to 60 starting in 2016.

The labor minister said the government will focus on the agreements that came from the talks.

On one of the agreed issues, the government will dissuade corporations from raising wages of high-ranking employees or executives already in the top 10 percent of salaries in the country. With the savings, they should hire more young people.

Other agreed issues include: improving working conditions for contract employees by launching an audit of their working conditions and getting advice from labor specialists; adopting a system of public reports on conglomerates abusing their subcontractors; raising minimum wages gradually; expanding welfare for working moms; gradually cutting maximum working hours per week from 68 to 52; and allowing management and labor to voluntarily set their own peak wage systems.

On Wednesday, representatives of the FKTU held a press meeting and presented “five unacceptable issues” to the government and the corporations that came out of the failed talks: extending two-year contracts for non-salaried workers to four years; gradually cutting maximum working hours from 68 to 52 gradually (unions want it cut immediately); adopting the peak wage system; revising wage regulations for the peak wage system; and allowing employers to freely lay off underperforming employees.

“While the social welfare system is still fragile and only 10 percent of all the companies in the country have unions, a regulation for easy dismissals and extending terms for non-salaried workers is a deterioration of our labor market,” said Kim Dong-man, a top official of FKTU, at a press meeting on Wednesday.

“[The labor unions’] attitude at the negotiating table was really disappointing,” Kim said at a meeting with commission’s officials on Thursday. “They left the meeting room in the middle of the talks.

“Although my [one-year] term did not finish, I see it effectively ending today,” he told reporters after the meeting.

Speculation arose that the commission, a presidential body launched in 1998, could be disbanded in the aftermath of the failed talks.

The Korean Confederation of Trade Unions, another major association of unions that has refused to attend the negotiations, called for the disbanding of the commission.

“The reform plan, which attempted easier dismissals, wage cuts and more non-salaried workers, was an impossible scheme from the beginning,” the group said in a statement Wednesday. “The government should abolish the plan and the commission, acting like a puppet, should be disbanded immediately.”

Kim Sung-taek, a senior researcher at the Korea Labor Institute, said there aren’t many bargaining chips for the government and companies to persuade the unions to return to the talks.

“The government already raised the base salary and extended the retirement age last year, and they have nothing left to persuade labor unions to accept their demands,” Kim told the Korea JoongAng Daily.