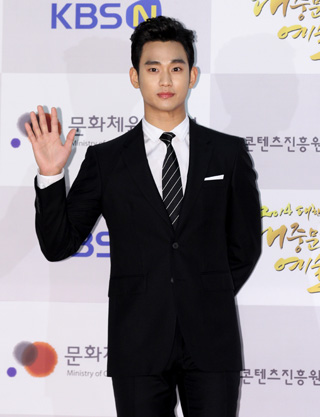 It has been confirmed that actor Kim Soo-hyun of last year’s biggest hit Korean drama series, “My Love from the Star,” will appear in the new movie “Real.”

The release of the thriller is planned for sometime next year.

The movie portrays a shady lead character who is one day confronted by an investigative reporter.

The 27-year-old actor will play the main character, a man blinded by his love of money. His ambition is to build a casino hotel and conquer his city.

Taking on such an ambitious character is a first for Kim.

The actor is returning to the silver screen for the first time in two years since his last feature film, “Secretly, Greatly,” was released in 2013.

Along with the movie, the actor Kim will be taking part in new Korean drama “Producers.”

In the film he will be acting out the role of a clumsy producer, heavily contrasting with the character he will take on in “Real.”

The drama will deal with stories that happen inside an entertainment broadcasting station.

In the drama, Kim will work alongside actors Cha Tae-hyun, Kong Hyo-jin and IU.

Twelve episodes will be shown in total.

Kim’s professional acting skills are widely acknowledged. He received the Best Actor award in 2014 in the SBS Acting Awards for his role in “My Love from the Star.”