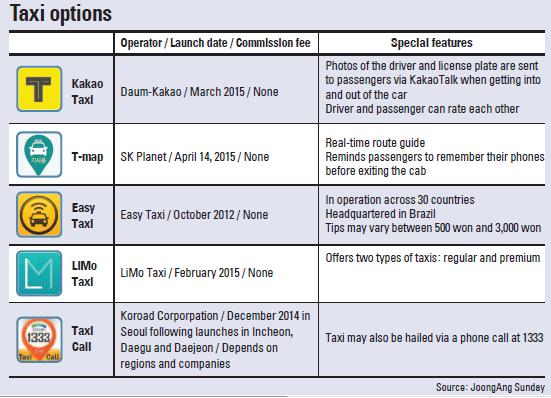 After the downfall of American ride-sharing app Uber in Korea, Daum Kakao has introduced its own mobile platform: KakaoTaxi.

The operator of the nation’s top mobile messenger app launched the service for Android devices in March, which allows users to request taxis directly from KakaoTalk.

KakaoTaxi is the first in a series of new services Daum Kakao has been preparing since second-largest portal site operator Daum Communications and Kakao merged last October.

Kakao’s platform replaces the voice calls customers usually have to make to hail taxis in a remote location. With regular taxis, a passenger is supposed to pay an extra 1,000 won ($0.92) for using a call service if the fare does not exceed 10,000 won.

KakaoTaxi, however, won’t charge any fees for either the passenger or the driver. Payments can be made either with cash or a credit card.

Once the user logs in with their Kakao account, their current location is automatically set as the pick-up location; the user sets their drop-off destination to complete the request. Based on a variety of factors, including the riding distance and current traffic conditions, the request is then sent to the best-positioned drivers who may choose to accept it or not.

Kakao has included several features intended to ensure passenger safety. All users will automatically receive the driver’s name, photo and vehicle information when their taxi request is accepted. When a phone call is made between the driver and the passenger, a generated number masks the passenger’s number to ensure privacy.

A text messaging function is also built into the app, with frequently used phrases including “Arrival in 5 minutes” and “Waiting at pickup location” preset for handy selection. Lastly, all text message exchanges are automatically deleted once the taxi reaches the drop off location.

Both drivers and passengers may rate the experience anonymously, and those who maintain high ratings will be offered diverse benefits, Daum Kakao said without elaborating further. An iOS version for iPhone users will be made available in April.

The debut of KakaoTaxi comes as the American ride-sharing service provider Uber reluctantly suspended its operation in Seoul earlier in March, following harsh a crackdown from the Korean municipal government and transportation authorities.

KakaoTaxi - on the back of KakaoTalk’s 38 million users in Korea - is expected to easily overwhelm preexisting or soon-to-be-released smaller taxi-hailing apps.

Currently the biggest player is Easy Taxi, a Brazilian app available on both Android and iOS. It is in operation across 30 countries worldwide, meaning customers may use the service without borders.

LiMo Taxi, launched in February, differentiates itself with a premium service by hiring drivers with over 20 years of experience and larger vehicles. It offers two taxi types - ordinary and premium.

SK Planet, a subsidiary of top mobile carrier SK Telecom, is set to launch T-map Taxi that will use the company’s T-map navigation platform next Tuesday.

An on-call service operated by the state-run KoROAD Corporation was launched in Seoul in December last year, after trial service in Incheon, Daejeon and Daegu. The service will be available nationwide next year.

The kinds of services that respective taxi apps provide do not appear differ too much from each other. They do not turn a profit at this stage, given that no additional premium is charged on top of the taxi fee.

But operators are optimistic about business potential. Annually, 4 billion taxi rides take place in Korea and the massive data from their usage pattern could open a wind of opportunities. Once an extensive customer pool is established, app providers may consider capitalizing on it for advertisements and coupon sales.