Carter says Thaad is not an issue anywhere yet

Carter says Thaad is not an issue anywhere yet 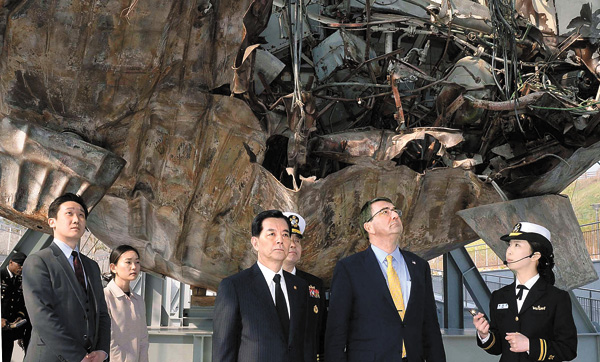 U.S. Defense Secretary Ashton Carter, second from right, and Korean Defense Minister Han Min Koo, fourth from right, look at the salvaged Cheonan warship on display at the Second Fleet in Pyeongtaek, Gyeonggi. The warship is believed to have been torpedoed by North Korea on March 26, 2010. [Joint Press Corps]

U.S. Defense Secretary Ashton Carter said Washington has not decided where it will set up the Terminal High Altitude Area Defense (Thaad) system because it was still in the production phase, adding that the U.S. has had no discussion with any party around the world for the system’s deployment.

During a press briefing following a meeting with South Korean counterpart Han Min-koo Friday at the Defense Ministry, the recently appointed defense chief said the U.S. is “not at the point yet of determining where it might be suitably deployed in the future.

“We will have to see how production goes and other training and deployment possibilities there are for that [deployment]. So we are not at the point yet where we would begin discussions with anyone around the world.”

The remark by the Pentagon’s top official on the advanced missile defense deployment comes amid rising expectation that Washington will put more effort toward inducing Seoul to introduce it on the peninsula to better defend against missile strikes from North Korea.

The Thaad system is intended to defend South Korea from possible nuclear and missile threats by North Korea and deter them. It is designed to shoot down missiles closer to their point of origin than South Korea’s current missile defense.

Talk of Seoul introducing the U.S.-led missile defense system has unnerved China, which thinks it could be used to monitor its airspace with advanced radar. Beijing has expressed its objection to the potential deployment to officials in Seoul, which in turn drew a protest from the Defense Ministry that China should stop trying to interfere in its decisions regarding security.

Questioned whether there are any signs that North Korea may be preparing for a nuclear test, Minister Han said no evidence had been found about that or the launch of a long-range missile in the near future. But Han said the possibility of the “North’s provocation should always be on the table considering its past behavior.”

On the deepening row between Seoul and Tokyo over what Korea sees as Japan’s attempts to whitewash its wartime aggressions of the 20th century and territorial disputes over the Dokdo islets in the East Sea, Carter said it is “not for the United States to interpose itself between the parties here.”

The two ministers also agreed to strengthen cooperation in fending off cyberattacks by Pyongyang in the wake of its alleged attacks on Sony Pictures last December.

Following the joint press conference, the Pentagon’s top man visited the Navy’s Second fleet headquarters in Pyeongtaek, Gyeonggi, where the salvaged Cheonan warship is on display, to pay his respects. It was the first time a U.S. defense secretary visited the site. It was reported that the trip was specially requested by the U.S. side.

Last month was the fifth anniversary of the sinking of the Cheonan, which Seoul blames on North Korea. Pyongyang denies being involved.

During the briefing, Carter said the trip would be a “reminder of how much we have in common” and that the 46 Korean sailors who perished on the ill-fated warship “weren’t much different from Americans serving in uniform on the peninsula.”

“Five years after that attack, and on behalf of the United States, I reaffirm our commitment to their memory, to the Republic of Korea and to peace and stability throughout the Asia Pacific,” said the American defense chief.